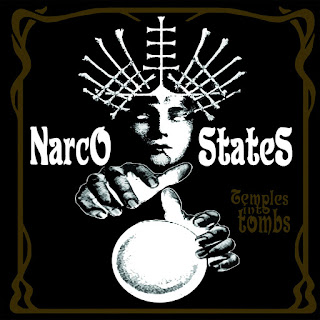 If I close my eyes while listening to the new Narco States album, I can just about convince myself that the band is ripping it up on stage right in front of me. That level of energy and immediacy are somewhat the product of home-recorded fidelity but more likely a testament to a band with seriously hot chops. Out on Piñata Records, the Minneapolis outfit's excellent sophomore LP Temples Into Tombs forges a three-headed monster out of '60s garage, psychedelic rock, and proto-punk influences.

Temples Into Tombs comes out guns a blazing on its opening tracks - sounding like what I imagine would have happened if Iggy Pop had fronted an American garage/psych band circa 1966. Propelled by Aaron Robertson's standout electric organ and Robb Lauer's powerhouse drumming, "Met Tet", "Fascist Fashionistas", and "Generation F" will get your heart pounding and your booty shaking. Meanwhile Michael MacBlane-Meyer on vocals channels Iggy at his most wild and primal - adding an attitude and edge that are generally missing from standard garage rock revivalism. This band really smashes it up! But just when you think you've got Narco States figured out, things start to get very interesting. The title track takes a slower, more mysterious turn - as much Doors as it is Stooges. The nearly seven-minute long "Ahemait" delves into acid rock/heavy psychedelia a la Iron Butterfly or Blue Cheer - allowing for deep sonic explorations but never ceasing to rock. That leads seamlessly into "Jealousy"- by far the most "accessible" track on the album and a fine example of straight-up psychedelic rock. Album closer "Fang Decay" carries on in a similar manner for nearly two minutes before departing on a long strange trip of its own.

What I really appreciate about Temples Into Tombs is that it doesn't lose steam after those first three or four relentlessly rocking tracks. If that was all that Narco States had to offer, the album would be worth hearing but perhaps not nearly as memorable. I love that the band matches its pure energy with great creativity in songwriting and musicianship. "Ahemait" and "Fang Decay" are not just excuses for the band to jam out for five minutes plus. They're interesting, formidable songs that show a whole other side to Narco States. "Jealousy", buried all the way down at track 7, would have to be considered the "hit". If, in the digital age, you wonder why bands even bother making albums anymore, it's worth noting how well these nine tracks fit together. This is one you'll wanna have on vinyl!