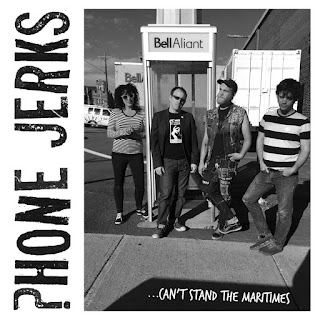 So Phone Jerks just might be my favorite new band of the year. Well, actually "new" band is not really an accurate term. This Moncton, New Brunswick foursome has been in existence since 2014 and did release an all-covers digital EP last year. But it wasn't until this year that Phone Jerks put out original material. And let me tell you: this shit is HOT! ...Can't Stand The Maritimes is the band's first vinyl record - a short and not-so-sweet one-sided 45 released by the always fantastic Goodbye Boozy Records. The group has also put out a limited (as in only 30 copies!) cassette called No Funswick. If you long for the glory days of garage punk/budget rock/lo-fi trash, you need to get over to Phone Jerks' Bandcamp and download everything the band has released so far! This is a band that totally hits the mark for garage punk - right down to the blown-out fidelity, primitive & furious musicianship, and take-no-shit attitude. You can hear the influence of classic bands like Teengenerate and Supercharger along with a mean streak rivaling newer acts such as Sick Thoughts and The Cavemen. It's really cool that all four band members take turns on lead vocals. You have a total group effort here, which shows in an abundance of killer tunes. The single is an absolute ripper, and I have to expect that there will be a few more of those coming our way in the very near future. In 2017, the term "garage" means a lot of different things to a lot of different people. To me it means raw and trashy, and I've been eagerly awaiting more bands along those lines. Phone Jerks are exactly what I had in mind!