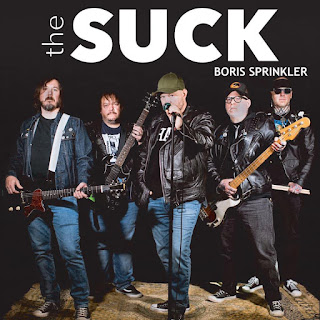 Somehow the world made it through all of last year without any new music from the SUCK. Man, that was a rough go. Fans were so distraught that a great many went as far as to proclaim 2020 the worst year ever. Fortunately, the unbearable wait is almost over. Boris Sprinkler, the second album from these Mid-Atlantic street rock champions, will officially be out next weekend on Mom's Basement Records. 2019's In​-​Cog​-​Neat​-​O surely set a standard that the SUCK would be hard-pressed to maintain. What would it take for the band to concoct another batch of tunes as massively rocking, supremely amusing, thoroughly unoriginal, and brilliantly stupid as the eight songs that comprised In​-​Cog​-​Neat​-​O? These secrets have never been revealed, but I believe Boris Sprinkler is the fruit of much deep reflection, excessive drinking, and deep reflection under the influence of excessive drinking.

Having already perfected a formula for what a SUCK album ought to be, the band took great care to not disappoint the fan base. Eight of Boris Sprinkler's ten tracks clock in at under two minutes, and the songwriting continues to strictly adhere to the tenet that no band needed to exist after the Ramones, except maybe HEAD. There are certain things we all demand from a SUCK album, so let's go ahead and run Boris Sprinkler through the checklist. Is there a song about drinking? There are actually multiple songs referencing drinking, but "Fantasy Beer League" is THE song about drinking and an instant classic in the SUCK canon. For a guy who loves sports, I am surprisingly terrible at fantasy leagues. But I feel like I could be a contender in this one! Is there a party song on this record? Why yes: "Who Brought The Tits" chronicles a basement hang so epic that a six-foot sub was fully consumed and The Dunk started throwing chairs. Check! Does the band manage another song as wrong and inappropriate as the last album's "Vape Store"? Why, yes: "You're Not Home" is way more wrong and way more inappropriate! Is there a cover of some unheralded pop-punk classic that's not nearly as good as the original? For sure, and this time it's The Proteens' "I Told You So". Does the album end with a devastating tale of heartbreak and despair exacerbated by modern technology? Why, yes: "J Prozac on a BMX Bike" is even better than its last album counterpart "The Catfish" and a reminder that the SUCK could be a top-rate pop-punk band if they ever lost the physical wherewithal to rock the streets. Elsewhere, there are songs about Dungeons & Dragons, suave secret agents, and, uh, jugs. The SUCK are nothing if not renaissance men.

My love/hate relationship with the musical genre known as "Ramonescore" tends to mirror my love/hate relationship with IPAs. Overall I find the style to be overdone and largely full of indistinguishable clones. But the handful of exceptions are truly magnificent. I'll gladly take a Troegs Perpetual any day of the year. And the SUCK is the Troegs Perpetual of its world. It seems fitting that the SUCK is on the same record label that has released music by The Vapids and NECK. If you like those bands, you will also like the SUCK. In fact, you probably already like the SUCK if you like those bands! Boris Sprinkler is a bigger and better follow-up to its formidable predecessor. The Alien and The Dunk have again turned out some of the hottest-sounding guitars in all of the land. The Cola remains a unique and charismatic vocal presence -- as convincing boasting about the stun gas in his key chain as he is pining over the girl who broke his heart years ago. And the Problem and the Basement continue to do all of the unappreciated work of keeping everything simple and tight (notice that on the album cover, they appear ready to start playing at a moment's notice, while The Dunk looks like he may have just murdered a man with his guitar). As a lifetime Pennsylvanian, I am proud that we get to count the SUCK as one of our own. Although I believe that 20% of Delaware may be eligible to claim the SUCK as well. I'll need to get a ruling on that. Boris Sprinkler officially releases the day after April 1st -- because the SUCK doesn't fool around!

Fuck yes. This album is bulletproof. Cannot wait for the masses to hear it!!

Great Song, Great video (!) Great state (at least most of it). thanks for highlighting this band.