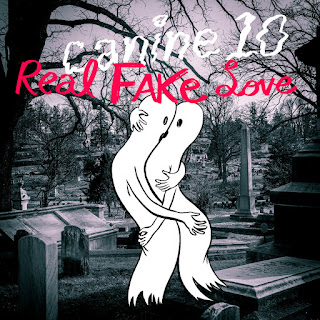 Released just in time for Valentine's Day, canine 10's "Real Fake Love" is the ultimate cynical love song. On this wonderfully bitter digital single, the Philadelphia foursome sounds more than ever like a geekier, Americanized Buzzcocks. The title track is classic canine 10 --- blending jaded lyrics about the inevitability of romantic dysfunction with hummable melodies, a cool guitar riff, and a chorus that's bound to be stuck in your head for days. It's actually the second track on the digital release. But if this were a 45, "Real Fake Love" would almost certainly be the A-side. I'm aware that we are well past Valentine's Day at this point. But if you're lonely and miserable, it's never too late to take comfort in knowing that many coupled individuals are equally miserable. If there was any question about canine 10 being modern masters of the anti love song, this track ought to seal the deal! The peppier, punkier "I Know You Know" is a treat in its own right. I hereby declare canine 10 the most underrated pop group on the scene today -- and I myself have been guilty of much of that underrating. My failure to list the band's album Nonsense! in my top 30 albums of 2020 has kept me awake at night and might even be a criminal offense here in the Commonwealth of Pennsylvania. "Real Fake Love" is definitely the top single of 2021 so far!
-L.R.
https://canine10.bandcamp.com/album/real-fake-love
https://www.facebook.com/canine10/
https://www.youtube.com/channel/UCztCRk8fDNCxtYnJXzH_y1g
https://www.instagram.com/canine10/
Posted by Lord Rutledge at 7:48 AM