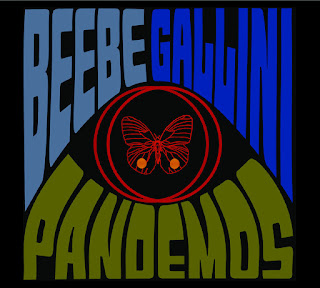 Pandemos is the long-awaited debut album from Beebe Gallini -- a band I've been exceptionally fond of going back to those ancient times of five years ago. The band recorded these songs in December 2019 strictly as demos. But then 2020 happened. Live shows and even proper band rehearsals were suddenly out of the question. Life gave Beebe Gallini lemons, and Beebe Gallini went ahead and made delicious lemonade! An album's worth of demos were sent off to Geza X for mastering. And today, Pandemos releases on the mighty Rum Bar Records!
First thing's first: Pandemos absolutely sounds like a "real" album. Sometimes "demo" translates to "rough" or "unfinished", but in this case the rawness of the recordings gives them a live (and lively!) energy. The lineup for this particular album is Miss Georgia Peach on vocals and guitar, Amy Larson Pearson on bass and vocals, and Travis Ramin on drums and lead guitar. These tracks were originally recorded as a way to share material with new guitarist Monet Wong. Now the whole world gets to enjoy them!
What's exciting to me is that I finally get to hear a large selection of original songs from Beebe Gallini. To this point, this band has been best known for its fantastic cover versions of garage and rock and roll songs from the '60s. Pandemos certainly does not lack for crackling cover tunes. The band's version of Randy and the Radiants' 1965 Donna Weiss-penned single "My Way of Thinking" is rock and roll at its most joyful and electrifying. And after hearing the band's take on the Bee Gees classic "To Love Somebody", the only response my brain could muster was wow. But can these folks write originals to rival the covers? You bet they can! Pandemos features six songs written by Miss Georgia Peach and another three written by Amy Larson Pearson. Running the gamut from high energy garage rock ("Little Sister") to glammy hard rock ("Mean Mama") to hopped-up rhythm & blues ("Busy Izzy") to straight-up red-hot rock and roll ("Danny"), these original songs fit in so well that you might suspect that they are covers! This is an album that builds on Beebe Gallini's previous musical identity. Of course you can throw on this album once it's safe to host your next garage rock house party. But I like how some of these songs reveal added dimensions to the Beebe Gallini experience. The heavy rocker "Bad Man" could almost be a Short Fuses song, while "Dusty" fully engages the band's pop side. And I love the way the album ends, with the sweet & heartwarming "Poppington Station" flowing straight into the band's thundering version of Roz Rogoff's anthem of empathy and acceptance, "Nobody Loves the Hulk".
Had Beebe Gallini chosen to sit on these '19-'20 winter demos, we certainly would have gotten a debut album eventually. But no doubt the band played back these tracks and knew it already had an album the world would want to hear. And it certainly it didn't hurt that the band had Geza X on hand to work his mastering magic! The old joke about a singer being so good that you would listen to them "sing the phone book" certainly applies to Miss Georgia Peach. But luckily, there was already an album's worth of material in the can. I can't imagine how big that Twin Cities phone book must be. It would probably take a box set to get all of that down on tape. Pandemos is a royal treat for fans of garage rock and rock and roll in general. All the kids are telling me that these tunes have a good beat and you can dance to 'em. Let us look forward to future recordings from Beebe Gallini's current lineup and eventually live shows. In the meantime, be sure to check out the Pandemos release party event this Sunday night! And dig the amazing music video (embedded below) for "My Way of Thinking" created by Wendy Norton from Norton Video. If we ever need to explain rock and roll to visitors from another planet, this video will do the trick!
-L.R.
https://rumbarrecords.bandcamp.com/album/pandemos
https://www.facebook.com/RumBarRecords
https://beebegallini.bandcamp.com/
https://www.facebook.com/WeAreBeebeGallini/
http://beebegallini.com/
Posted by Lord Rutledge at 2:39 PM