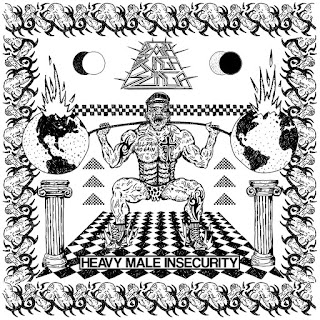 As we've moved into the third month of 2021, I've fallen a little behind on some of the really good full-length albums that have been released so far this year. I'll start playing catch-up with the fifth LP by Norwegian rockers Death By Unga Bunga. Heavy Male Insecurity does include the four songs the band released as singles last year. So you already have an idea of what to expect: big catchy arena rock with power pop hooks and garage/punk roots. If you liked the band's last couple of albums, you'll love this one!

While not fully a concept album, Heavy Male Insecurity does explore at length the very hot topic of modern-day masculinity. The lead track "Modern Man" is a true anthem for our times. It employs touches of humor to make a very serious statement about what it ought to mean to be a man in today's world. The hooks on this track are massive! While you're pumping your fist and shouting along, you're joining Death By Unga Bunga in defining a more contemporary, less toxic brand of masculinity. The band's modern man is in touch with his emotions, caring and considerate, and willing to fight against injustice and prejudice. He also enjoys baking and makes an effort to eat less meat. I might have to work on that last part, but I can dig what the band is saying here. "Egocentric" revisits the same theme by exploring the antithesis of the modern man: the overgrown child who fully lacks empathy. Elsewhere "All Pain, No Gain" hits very close to home as it pokes fun at dudes like me who are in the gym every day obsessing over their "gains". Maybe I should feel personally attacked, but I find this song quite funny and very much on-point. And what a banger this track is -- taking the "action rock" genre straight over the top and even going full-on Iron Maiden in the guitar solo!

Heavy Male Insecurity complements Death By Unga Bunga's outstanding 2020 singles ("Egocentric", "Not Like The Others", "Live Until I Die, Trouble") with some of the band's strongest material to date. This album delivers a great mix of radio-ready power pop hits ("Like Your Style"), epic arena numbers ("White Lies"), and big hooky rockers ("My Buddy and Me"). This whole "'70s hard rock meets power pop with a punk influence" genre is hardly a new thing, but Death By Unga Bunga pulls it off better than almost anyone else. This is a band that knows how to write quality tunes with legit hooks. These guys come off like they'd be super fun to hang out with, and their music manages to reflect that. I don't see how anyone could watch the music video "Egocentric" and not totally love these guys! If you're looking for a contemporary and enlightened take on the arena rock of yore, you cannot go wrong with Heavy Male Insecurity!

Agree! This is a great band. Great production, great songs, and most important, it totally rocks.

This album's got it all.