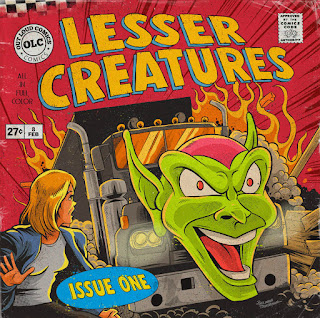 The first time I heard Lesser Creatures (on Mike Patton's radio show The Radiant Radish), my instant reaction was, "Hey, this is the best Screeching Weasel song in years!" I quickly learned that it was actually Lesser Creatures, a duo comprised of Nick Spoon from Ramonescore Radio Records and Zac Buzzkill from The Radio Buzzkills. I swore to god that I was forever burned out on any band that reminded me of Screeching Weasel. But give credit to Lesser Creatures, for they've made a liar out of me! I would describe the band's debut full-length Issue One as exactly the kind of record I would have tried to make 25 years ago if I had had the musical talent to pull it off. It's pop-punk by the book, carried off with tremendous enthusiasm and energy. It's odd that nine out of ten albums that sound like this would bore the hell out of me, yet somehow this one hits the sweet spot. The influences are obvious. Clearly these guys have worn out their treasured copies of Boogadaboogadaboogada! and My Brain Hurts. In spots, I'm also reminded of The Vindictives, Sloppy Seconds, and early Connie Dungs. This is what you call a tried-and-true formula, and Lesser Creatures pump it full of life with simple catchy tunes and engaging lyrics that range from goofy to thoughtful. And the execution of the formula is top-notch. As far as Weasel rips go, "Negative Nick" is pretty close to perfect. Elsewhere, songs cover everything from pop culture references ("The Office Drinking Game", "Jim Lahey") to love & relationships ("Nowhere With Me", "Stephanie Jean") to social commentary ("Reset The World") to wanting to go to Germany ( "SV Meppen") to living with depression ("Smartest People"). There are also really cool covers of Tom Petty's "Don't Come Around Here No More" and The Proms' classic "Spike-A-Da-Punch".
All in all, Issue One is a really fun record. If you don't like pop-punk, this is not an album that's going to cause you to reconsider your position. But if you can never get enough pop-punk, you're gonna freaking love Issue One! As someone who came to the world of reviewing music way back when due to my excitement over the early '90s pop-punk scene, I hear this album and am quickly reminded of why I got into all of that stuff in the first place. Get it now from OUTLOUD! Records!
-L.R.
https://outloudrecords.bandcamp.com/album/issue-one
https://www.facebook.com/lessercreatures/
https://lessercreatures.bandcamp.com/
https://www.facebook.com/OUTLOUDrecords
Posted by Lord Rutledge at 4:44 PM