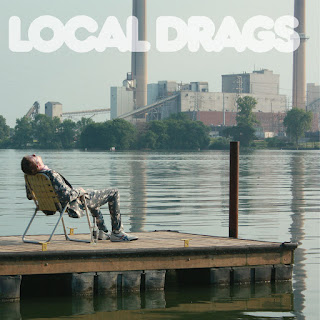 It's hard to believe it's been almost two years since I reviewed Shit's Lookin' Up, the debut full-length album from Springfield, Illinois's Local Drags. Time flies when the world's going through hell! I am happy to report that Local Drags have released a terrific second album titled Keep Me Glued on Stardumb Records. On this release, singer/guitarist Lanny Durbin is joined by his Starter Jackets bandmates Fred Malcom and Carter Bibb. With Luke McNeill from Starter Jackets producing the album, the strong connection between these two bands is quite clear. But whereas Starter Jackets inhabit a perpetual early '80s new wave universe, Local Drags continue in the vein of Midwestern indie rock/power pop circa the later '80s and early '90s. Keep Me Glued has a reflective, melancholic vibe to it while still packing plenty of punch. The influence of Cheap Trick, Tom Petty, and The Replacements remains foundational to Local Drags - along with touches of '90s college radio power pop. And on this album, I'm reminded quite bit of the poppier side of D Generation. This is a really enjoyable set of mid-tempo power pop songs. Durbin knows how to write a solid tune with a hook, and the feel of this record is just perfect for an emerging spring. It makes me wanna crack open a can of cheap beer and sit on the porch contemplating my life. I love that this album is available on "chemical lake blue" vinyl! Order your copy from Stardumb Records in Europe and The Machine Shop  in the U.S.A.!
-L.R.
https://localdrags.bandcamp.com/album/keep-me-glued
https://www.facebook.com/localdrags/
https://www.stardumbrecords.com/products/local-drags-keep-me-glued-lp
https://www.facebook.com/stardumbrecords/
Posted by Lord Rutledge at 4:00 PM