Goin' Places - Save The World 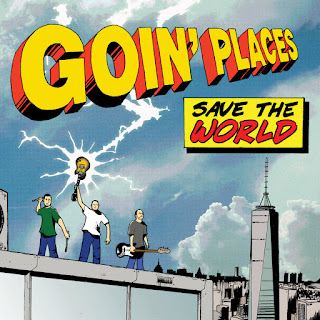 Continuing its established pattern of releasing an album every decade, beloved Staten Island pop-punk trio Goin' Places is back with the wonderful Save The World. Out on Mom's Basement Records, Save The World is the band's first album in nine years and just its third album overall. It's hard to believe that Goin' Places has now been a band for 20 years. But the numbers sure don't lie! It's a tricky proposition for a pop-punk band to "grow up". One hand, you know you can't go on forever strictly writing songs about the teenage experience. On the other hand, you risk losing the entire appeal of the band if you "mature" too much. Goin' Places have navigated this transition brilliantly.

Save The World is an album guaranteed to satisfy longtime fans. As always, Richie, Victor, and Frank stick close to the Green Day/Queers/MTX playbook with deeper roots in the harmony and melody driven rock and roll of the 1960s. They've made a pop-punk record for people who love pop-punk -- and you would not expect anything different from Goin' Places. But that doesn't mean that Save The World is a total copy of its two predecessors. Lyrically, it's far more serious and thoughtful than previous albums. This is a record full of songs about getting older, confronting disappointment and failure, reflecting on the past, and figuring out what lies ahead. Some of the album's finest tracks ("4:04", "Live Those Times", "Message In A Dream") reflect that the band members are in a far different place in life than they were when they made Girl Songwriting 101. Yet even with all of that deeper thinking involved, the songs remain steeped in the trio's old standbys: catchy melodies, tight harmonies, and Richie and Victor's likable tag team vocals. Fear not, though: Goin' Places may have gotten more serious, but they still aren't taking themselves too seriously. On "This Song Is Not About A Girl", they have a great time poking fun at themselves and almost every other pop-punk band out there. Meanwhile, "Listen To My Love Song" and "Across The Room" actually are about girls and are absolutely great! Elsewhere the band isn't above throwing in a couple of crowd-pleasing numbers ("I'm Gonna Steal Your Girlfriend", "Cell Phone Girl") that embrace nearly every teenage pop-punk cliché in the book, much to our collective delight.

Save the World begins with the premise that there's too much hate and divineness in our world, and that maybe some fun pop songs could bring people together. That's a cause I can fully endorse, and Goin' Places are more than up to the task. Save The World, although it features an older, wiser Goin' Places, is still tremendous fun and a reminder that sometimes great pop is exactly what we need. While these guys were already qualified to write a college course on girl songwriting a couple decades back, now they've clearly graduated to teaching the masters class.