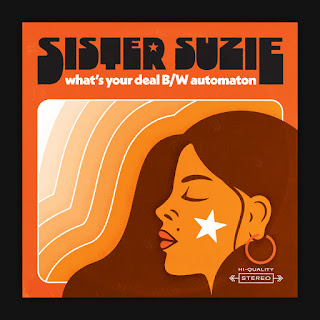 "What's Your Deal", the first vinyl release from Edmonton's Sister Suzie, is an exciting double shot of catchy, kick-ass rock and roll. Out on LSM Vinyl (a division of Pirates Press), this 7" features two of the strongest tracks from Sister Suzie's digitally-released debut album Don't Want To. Stylistically, this band brings to together the best elements of junkshop glam, traditional rock and roll, and glam-influenced old style punk rock a la Cock Sparrer & Slaughter and the Dogs. "What's Your Deal" is a straight-up rock and roll anthem. It's got that foot-stomping, big guitar glam rock sound with huge, sticky hooks and shouted-out backing vocals. Andrea has rock star charisma out front, and behind her is a band with tight, rockin' chops. That guitar solo is bad-ass! On the flip, "Automaton" is punkier and not quite as sleazy --- but still likely to get you up and shaking what you got. And be careful: that hook will stick in your skull!
After nearly six years as a band, Sister Suzie are poised for a huge 2021. The group will be following "What's Your Deal" with a second single coming out soon on Reta Records! Vinyl copies of "What's Your Deal" can be ordered here! Digital versions are available from both the Sister Suzie and Reta Records Bandcamps!
-L.R.
https://sistersuzie780.bandcamp.com/
https://www.facebook.com/sistersuuuzie/
https://retarecords.bandcamp.com/album/whats-your-deal-ep
https://shop.piratespressrecords.com/collections/lsm-vinyl/products/sister-suzie-whats-your-deal-b-w-automaton-7
Posted by Lord Rutledge at 10:51 AM