Indonesian Junk - Living In a Nightmare 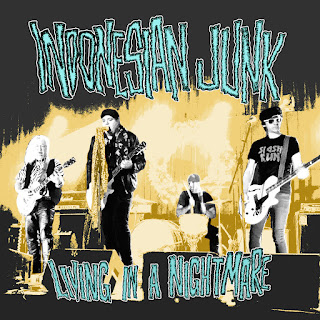 On its fourth LP, Milwaukee's Indonesian Junk continues to blend the best parts of punk, glam, power pop, and arena rock into one singularly awesome sound that no reasonable human being could possibly resist. IndoJunk singer/guitarist Daniel James wrote Living In a Nightmare in May and June of last year. He and his bandmates Johnny Cyanide (bass), Mike Mattner (drums), and Adam Turetzky (guitar) recorded the album over a weekend in October with Shane Hochstetler at Howl Street Recordings in Milwaukee.
The timing of this album's creation might lead you to believe that the title is a reference to 2020 and the Coronavirus. But the nightmare being referenced here is systematic racial inequality in America -- and the grim realization that half of the country either denies its existence or simply doesn't care. For this release, James has written a pair of powerhouse protest anthems in "Livin' in the USA" and "Policeman". Both songs rage furiously against this unacceptable state of a nation. Yet what makes them so riveting is that they are killer tunes first and foremost. "Livin' in the USA" is a scorching punk tune that for some reason reminds me a little of Demolition 23. And "Policeman" is the very definition of an anthem -- its catchy sing-along chorus doubling as a rallying cry against injustice. It takes a skilled songwriter to craft an album where tales of heartbreak can logically co-exist with songs addressing important social issues. Yet James has pulled off that very thing here. And it feels so authentic to him. He's a passionate guy, and Living In a Nightmare is essentially his heart on a plate.
Living In a Nightmare, to me, is the best Indonesian Junk album because it gives you a little bit of everything that makes this band so cool. It's a record full of big hooks, catchy tunes, loud guitars, and ripping solos. "Type of a Girl" and "One More Try" is an opening 1-2 punch that would be the envy of most power pop bands. "I Don't Mind" sounds like the best song that Richard Hell and the Voidoids never wrote. "Tracy" could be a long-lost Joneses song. At nine minutes plus, "Bawlin' My Eyes Out" is the epic closer every great album ought to have. Whether you're a punk lifer, a glam rocker, a power pop geek, or just someone who waits patiently for Thin Lizzy or Cheap Trick to come on when the Boomer FM channel is playing, there's something on this album for you. It releases today on compact disc on Rum Bar Records. Vinyl will be available this summer on Spiderbite Records!
-L.R.
https://rumbarrecords.bandcamp.com/album/living-in-a-nightmare
https://indonesianjunk.bandcamp.com/album/living-in-a-nightmare
https://www.facebook.com/RumBarRecords
https://www.facebook.com/indonesianjunk
Posted by Lord Rutledge at 2:39 PM