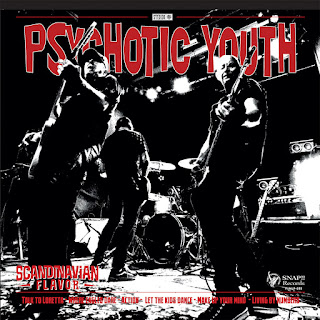 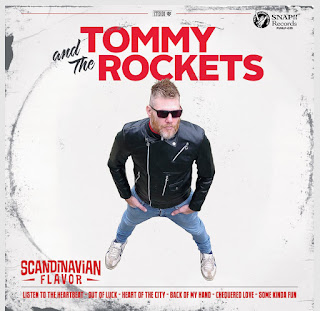 You know, I really love a good covers album. Even better is when two bands I like team up for a covers album. It's double the fun! Out on Madrid's Snap Records, the Scandinavian Flavor LP features two of the finest bands from Northern Europe's power pop/punk/garage scene covering old favorites in their signature styles. On one side, you have Sweden's legendary Psychotic Youth. On the other, you have Denmark's Tommy and the Rockets, who inhabit a magical world where the Ramones and Beach Boys rule the airwaves forever.

The Psychotic Youth side of Scandinavian Flavor is pure fun - as Jörgen and the gang tear through high-energy versions of songs by everyone from The Nervous Eaters ("Loretta") to The Misfits ("Where Eagles Dare") to synth-pop lesser-knowns New Musik ("Living By Numbers"). Some of these covers (like the Stiv Bators/David Quinton classic "Make Up Your Mind") are completely faithful to the original versions. But the band gives quite a few of these songs that distinct Psychotic Youth flair. If you didn't know "Let The Kids Dance" was a Bo Diddley song, you could easily mistake it for a Jörgen Westman original! I would imagine that these songs are already part of Psychotic Youth's live set. And if they're not, they sure should be!

The Tommy and the Rockets side of the album is essentially a tribute to the late '70s/early '80s era of new wave. Tommy takes on some songs that are pretty much untouchable (The Jags' "Back of My Hand", Nick Lowe's "Heart of the City", Pointed Sticks' "Out of Luck") and turns out very worthy renditions. He also does absolutely amazing versions of D.L. Byron's 1980 single "Listen To The Heartbeat" and Kim Wilde's international smash "Chequered Love". If you grew up listening to the Rock 'n' Roll High School and Times Square soundtracks, you'll be into the spirit of the Tommy side of this split. He even covers Chris Montez's 1962 side "Some Kinda Fun" in a style quite similar to the Teenage Head version!

I have come a long way in my attitude towards bands recording cover songs. When I was young and snotty, I enjoyed covers live but never saw the point in bands putting them on records. But the older, wiser me appreciates how interpreting the material of other songwriters is such a huge part of the tradition of rock and roll. Even better, cover songs often open a doorway to great music that some people may have not been previously aware of. Scandinavian Flavor is a success on two levels. If you're a fan of the songs covered here, you will enjoy these new renditions which are terrific all the way through. And if much of this material is new to you, you're gonna have a blast digging into the original versions. That, my friends, is what we call a win-win! Ain't rock and roll great?

Posted by Lord Rutledge at 9:54 AM