Hayley and the Crushers - Fun Sized 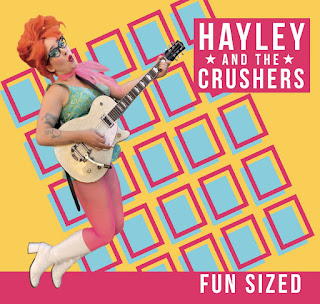 There were literally only two things that could have made me love Rum Bar Records even more than I already did. One would have been if the label started bottling its own beer. The other would have been for the label to sign Hayley and the Crushers. While the former has not happened (yet), the latter most definitely has. Needless to say, I'm pumped! The Crushers' Rum Bar debut is called Fun Sized. And as the title suggests, this is a nice little snack-sized taster of the band's incredible 2020 output. It compiles all three songs from both of the singles released by the band last year - which were previously unavailable on compact disc. Rounding out the disc are two tracks from last year's magnificent long player Vintage Millennial and an absolutely stunning cover of the Ramones' "Suzy Is A Headbanger" - which was previously available only in digital form. I just love that this CD exists. If you've yet to become fully initiated in the Crusherverse, Fun Sized would serve as a fine introduction to this band for the nice price of $7 (or only $5 for a download). And for those who do own Vintage Millennial but didn't pick up the "Jacaranda" and "Church of Flag" singles, this is a convenient way to grab both at once!

As the dark clouds of 2020 slowly begin to lift, "Jacaranda" is the perfect song for this optimistic moment. It's a song about getting out there, meeting people, and opening one's self up to all that this beautiful world has to offer. It was a terrible irony that Hayley and the Crushers did not have the chance to perform this ultimate summer song for anyone last summer. But perhaps things will be different in 2021! "Church of Flag", which celebrates keeping the punk rock faith into old age, was a late-year release that went a little bit under the radar. The arrival of Fun Sized breathes new life into both of these songs, which will surely be crowd favorites once the band is again able to take its act on the road. The "filler" material rounds out this disc nicely. "Kiss Me So I Can", in my book, is one of the best tracks on Vintage Millennial. "Water On Glass" is a wonderfully Crusherized cover of Kim Wilde's 1981 hit. And my god, this CD would be worth buying just for the "Suzy Is A Headbanger" cover alone! If I close my eyes, I can convince myself I'm floating in a swimming pool and catching a whiff of the ocean. With meteorological spring less than two weeks away, it's by no means too soon to start daydreaming about lounging by the pool, soaking up the sun, and frolicking with sea creatures. Equal parts punk, pop, surf, and rock and roll, Hayley and the Crushers never fail to deliver the soundtrack to eternal summer. Pop Fun Sized into your car CD player, and you'll have sunshine on even the most dismal day!

Email ThisBlogThis!Share to TwitterShare to FacebookShare to Pinterest
Labels: Hayley and the Crushers, Rum Bar

HAYLEY AND THE CRUSHERS , one of the best band these days !!!!