Ryan Allen - What A Rip 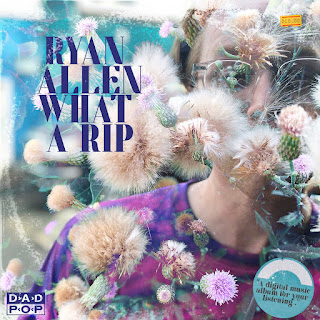 What A Rip, the latest album from Ryan Allen (Extra Arms, Thunderbirds Are Now!, Destroy This Place), is not the first "2020" album I've written about. Nor will it be the last. But it will surely go down as one of the best. The title is in some ways a humorous acknowledgement that Allen "borrowed" from a classic song or two in the process of writing this album. But the real rip-off Allen is referencing is 2020 itself. This was a year that deprived us of so much. We all missed out on time spent with family and friends. Kids missed out on going to school. Bands missed out on playing shows. Birthdays, graduations, and holidays were not the same. Many of us literally lost people we loved. What a rip indeed!

With What A Rip, Allen gives us a 2020-themed record that doesn't try too hard to be a 2020-themed record. Like so many other musicians and artists, he made the best of a bad situation last year and used his pandemic downtime to focus on creative pursuits. Last year alone, he released a 20-song album titled Song Snacks Vol. 1, a demo collection called RCHIVES, two albums of cover songs, and several singles. While not super-intentionally a concept album, What A Rip clearly explores ideas that were running through Allen's mind as the year progressed. In terms of musical inspirations, he went back to some of the most foundational bands in rock roll. The influence of the Beatles, Rolling Stones, Kinks, and The Who is all over this record. And seriously: if you're gonna steal from other bands, those are the ones to steal from! It actually all started with a friend lending Allen a guitar pedal that mimicked the sounds of a Mellotron keyboard. And from there, the songs on this record just came to him. What A Rip brings together various elements of that classic mid-to-later '60s era of popular music - from garage rock to melodic guitar pop to psychedelic rock to baroque pop to early glam rock. While it's fun to joke about who he might be ripping off from track to track, Allen does a wonderful job of stealing creatively. And isn't that what all of the best rock and roll of the last 40 years has basically done? "On My Mind" sounds like what would happen if "Paperback Writer" and "Last Train To Clarksville" made a baby. "Look In My Eyes" is probably meant to bring to mind The Nazz's "Open My Eyes", yet it's by no means a straight rip. "Already Gone" steals a riff from T. Rex that was already stolen from Howlin' Wolf and incorporates it into a very Ryan Allen sounding song. While very obvious in its inspirations, the material on this album is well-crafted and consistently strong. In my book, songs like the simple, sweet "Glad That I Have You" and the gorgeous, Lennon-esque ballad "Only Son" (featuring Allen's dad Brad on guitar and brother Scott on keyboards) are two of the all-time high points in the Ryan Allen/Extra Arms songbook. Featuring an appealing mix of rockers, pop songs, and wonderful ballads, What A Rip is the sort of great all-around rock record that you just don't hear often enough these days.

While I've enjoyed Ryan Allen's two albums with the full band version of Extra Arms, What A Rip has a home-recorded, deeply personal charm to it that takes me back to when I first heard Heart String Soul six years ago and became an instant fan. Allen is one of those songwriters that you just can't help relating to. In telling his own personal story through song, he touches on experiences we all share. In that respect, he was an ideal songwriter to make a 2020 themed album. What A Rip doesn't try to be profound or deeply insightful. It merely tells the tale of one man trying to navigate his way through a year full of hardships, gloom, and chaos. This is an album about loss and uncertainty and despair - but also an album full of hope and gratitude for the loved ones who make this life so worthwhile. I know the term "dad rock" is often meant as a knock. But this album is an example of what all dad rock should aspire to be. Having previously made albums in the styles of power pop, alternative rock, and indie rock (as well as the genre-hopping Song Snacks Vol. 1, which I deeply regret sleeping on when it came out last summer), Allen now presents his tribute to rock and roll. Yet the constant throughout has been how much of himself he puts into his songs. Digging into his full catalog on Bandcamp is surely a multi-hour commitment. Yet it's an endeavor I highly recommend!