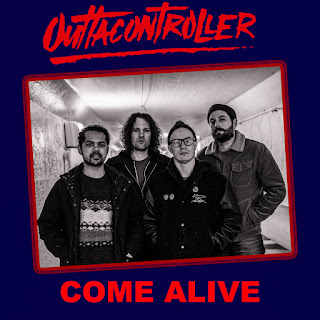 Since the early days of this blog, Canada's domination of the garage/punk/powerpop scene has been an on-going theme of my writings. At one time or another, I have heralded everyone from Mother's Children to Sonic Avenues to the Steve Adamyk Band to White Wires to Marvelous Darlings as the defining band of one of the best decades of punk music that any nation has ever produced. But there was one band in the mix that I never gave quite enough credit to, and that band has outlasted most of the big names listed above. Halifax, Nova Scotia's Outtacontroller has been a consistent force over the course of four LPs dating back to 2012. Outtacontroller, more so than any band, typifies the punk sound that I've associated with Canada (and in particular, eastern Canada) over the last ten years. I'm talking buzzsaw guitars with garage grit, pop melody, and just the right amount of a Ramones influence. But part of this band's staying power has been its ability to build on its core sound. And new single "Come Alive" is the perfect example of that. This is Outtacontroller's first new music since releasing the excellent long player Sure Thing last year. The song starts off with a mellower feel to it, with an emphasis on melody and amazing sounding guitars. But sure enough, it builds in intensity to a point where you can really feel the power not just in the music but also in the vocals and lyrics. Terry and James have written and produced one heck of an impressive song here. This is a melodic punk tune that doesn't just sound like a reworking of countless songs you've heard before. With that mix of finesse and punch, this band truly flexes its musical chops. "Come Alive" leaves me wanting more, and that can only be a good thing. I'd say Outtacontroller is off to a fine start in spearheading another great decade of Canadian punk rock!

Posted by Lord Rutledge at 7:54 AM