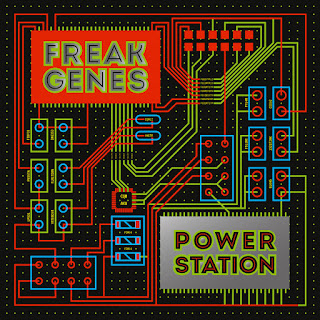 It is interesting that many modern-day "post-punk" bands will maintain a signature sound for years - as opposed to the bands that influenced them that were always evolving at a rapid pace. But then you have Freak Genes, who in less than four years have practically become a whole new band. Power Station, out now on Feel It Records, is already the U.K. duo's fourth LP. The band's growth between 2017's quirky, poppy Playtime and the strikingly synthetic Power Station has been dramatic and impressive. Yet if you listen to all four albums in sequence, you'd have to admit that the progression has been logical. Andrew and Charlie formed Freak Genes in the spirit of experimentation. Together they found a place where oddball songs of theirs that didn't quite make sense for their other musical projects could fit together perfectly. And while Playtime was brilliant, the band could never consider repeating the formula - because there never was one to begin with! And so Andrew and Charlie pushed onwards, gradually creating a musical identity for Freak Genes that's been distinctive yet constantly evolving. With each record, the duo has increasingly experimented with synthesizers, drum machines, and electronic sounds. And that takes us to Power Station, which the band has described as "synthetic pop for problem times". The vibe of this record is a fantastic cross between 154 era Wire, synth-pop circa 1981, and early '80s arcade game sound effects. Everything from the cover art to the album title to the songs themselves screams 1980s retro futurism. And yet this record is more of an update on '80s synth-pop than it is a proper throwback. This is no rehash of the old wave - it's the start of a new one. And after 40 years, I'd say it's about time.

Andrew and Charlie walk a very fine line on Power Station. On one hand, the album so fully embraces the electronic/synthetic aesthetic that one has to listen very closely for evidence that any "traditional" musical instruments were utilized in its creation. But the success here is that this largely machine-made album is by no means devoid of emotion or humanity. Across their bold and interesting evolution, Freak Genes have remained a pop group through and through. Personality prevails, and the machinery is just the means to an end. These songs still possess honest-to-goodness melodies, which have come into fruition through tremendous creativity and a skillful melding of electronic sounds. This is unquestionably the "darkest" Freak Genes record, which seems completely appropriate at this moment in time. Yet it's far from a fully bleak affair. It still has its "pop" moments ("Chat" has all the basic elements of a "classic" Freak Genes song; "Let's Get To Work" is a snappy little piece of electro-funk; the title track summons the spirit of new wave era Devo). The longer, more sophisticated compositions ("Followed It Down", "Ford Fairlane", "You're Taking Me Over") are something akin to futuristic symphonies. And ultimately, these "deeper" cuts are the ones that have impressed me the most as I've spent more time absorbing Power Station as a whole. As with every successive Freak Genes release, this album is a more cohesive and fully realized creation than the one that preceded it. Given that I am most often inclined to prefer simplicity over invention in popular music, it's somewhat surprising that I am so fond of this album. But perhaps what pleases me is that these two have found a way to experiment with their craft without losing the most essential qualities that make them such a delightful musical duo. They seem to have stumbled upon an artistic path that is limited only by their collective imagination. And so I'll close with one of my go-to reviewer clichés: I can't wait to hear what they do next!