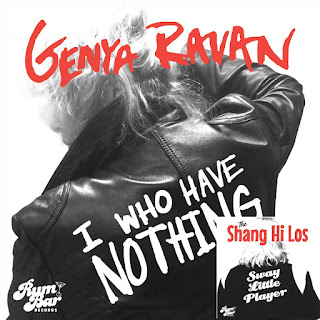 Now here's a dream team-up from the Rum Bar Records hit factory! Genya Ravan (Goldie & the Gingerbreads, Ten Wheel Drive) is a true legend of rock and roll. The Shang Hi Los were my #1 new band of 2020. Both artists share real estate on a new 7" release that Malibu Lou has been raving about to me for months. And let me tell you: he had reason to rave! Ravan's contribution to this split is an absolutely amazing cover of the soul classic "I Who Have Nothing" (a Leiber & Stoller adaptation of the Italian song "Uno Dei Tanti"). As Ravan began work on the recording of this song, it occurred to her that the legendary Nile Rodgers needed to play the rhythm guitar. So she reached out to Rodgers, who immediately agreed to play on the song. Needless to say, he absolutely kills it on this track. And Ravan, now with six decades in the industry under her belt, has never sounded better! Working with a red-hot band that also includes Bobby Chen, William Brady, Dennis DiBrizzi, and John Lee Cooper, Ravan breathes new life into this old classic with a powerful and passionate vocal performance. There's a funky, down-and-dirty energy to this version that gives it a unique place in the storied history of this song. We're talking about a song that has literally been recorded over 100 times. Yet there are certain artists (Ben E. King, Tom Jones, Shirley Bassey, Donny Hathaway & Roberta Flack) who have had the chops to truly make it their own. I would most definitely add Genya Ravan to that list!

Ravan, the famed singer and record producer, is best-known to many in more recent years as a radio personality. She continues to support the bands and artists that are keeping rock and roll alive today. One of her favorite present-day singers is Jen D'Angora, so the idea of a Genya Ravan/Shang Hi Los split makes perfect sense. The Shang Hi Los' side of this split features the band's track "Sway Little Player". Since I have already written at length about this particular song (it topped my list of singles released in 2020), I'll just add that that I'm excited it's finally available on vinyl! It's usually bullshit when a record is described as a "double A-side", but in this case it's the absolute truth. Which song is the "hit"? They both are! If you buy the single from Rum Bar's Bandcamp, you'll also get Ravan's cover of Little Willie John's 1960 King Records side "I'm Shakin'" as a digital bonus track. It features guest vocals from none other than Jen D'Angora. How's that for a pair of powerhouse singers? And, hey, I would gladly listen to Genya Ravan cover R & B classics all day! Officially out today, this split is more than worthy of a place in your rec room jukebox or your case full of 45s!