The Cheap Cassettes - "See Her In Action!" 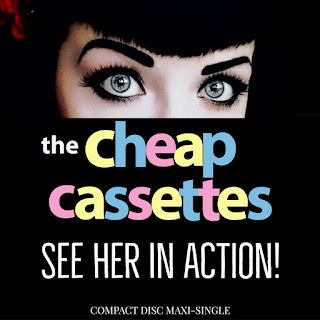 Today I'm reviewing The Cheap Cassettes for the tenth time. This puts the band in very exclusive company. They will now receive merit pins and keys to the F & L secret lodge - where they can drink frosty beverages and receive spa treatments alongside The Connection, Vista Blue, and Kurt Baker. It has been 15 months since I last wrote about The Cheap Cassettes. Honestly, it feels like it's been much longer than that given all that has gone down in the world since my favorite power trio released a digital EP called See Her In Action! in November of 2019. I think we all aged five years in 2020 - except for Charles, who somehow looks younger every year. Appropriately enough in the week of Groundhog Day, Charles, Kevin, and Izzy present their brand-new release....See Her In Action! Out today on compact disc on Rum Bar Records, this maxi-single finally gives the three songs from the original EP a proper physical release. As a bonus for longtime fans, this CD issue of See Her In Action! tacks on a pair of live tracks. Having already reviewed this EP when it was originally released, I probably don't need to get too deep into the individual tracks. Let's just say if you like power pop rooted in good old rock and roll, this is a must-own disc. Last time I implied that the title track was the best song Charles has written yet for The Cheap Cassettes. The only thing that makes me reconsider that stance is that "Lil' Bit Everyday" might be even better! I originally described it as the "greatest love song to alcohol that anyone has written in years". And perhaps given our collective hardships over the past year, this song has taken on an even more powerful meaning in 2021. So yes, I'm going to change my mind and proclaim "Lil' Bit Everyday" the "hit" of this EP. The band would probably not disagree- considering that they have released an absolutely amazing music video for the song that was co-created by Todd Michael Johnson & Michael O'Rourke. I encourage you to click play now, since this song and video are far more profound than anything I could say myself.
The re-launch of See Her In Action! is exciting to me for multiple reasons. For one thing, now I can jam out to these songs in my car! In addition to that, this finally puts this EP in play for all of you who don't do the downloading/streaming thing. And this is the best set of songs that Charles Matthews has ever put his name to. The live tracks are a nice treat as well. "Red Line Blue" is a preview of a song that will hopefully turn up on the next Cheap Cassettes album. "Valentine", of course, is a Replacements cover - and one of my very favorite Replacements songs (I'm talking top three territory). If you know The Cheap Cassettes and know "Valentine", you'd probably agree that this is a cover that was meant to be ("In the spirit of The Replacements, we kind of learned this song"). While 2020 was mostly a year of disappointments for The Cheap Cassettes (e.g. a canceled gig with The Figgs, a scrapped album recording session), the arrival of See Her In Action! on CD sparks high hopes for this band in 2021. No Hedy Lamarr on the cover this time, but it seems the band had no trouble finding an equally classy successor!
-L.R.
https://rumbarrecords.bandcamp.com/album/see-her-in-action-maxi-single-ep
https://cheapcassettes.bandcamp.com/album/see-her-in-action
https://www.facebook.com/cheapcassettes/
https://www.facebook.com/RumBarRecords
Posted by Lord Rutledge at 8:33 AM