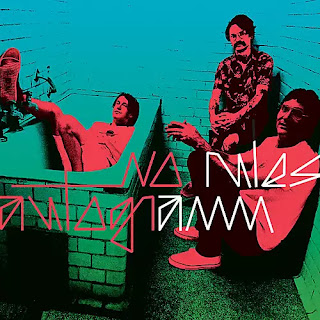 Time spent with Autogramm is always a ticket to an eternal 1980-81. For its latest single/video, the Vancouver-based trio has taken this concept to ridiculous extremes. And by ridiculous, of course I mean awesome! "No Rules" is the first single off of Autogramm's forthcoming LP of the same name. The band has premiered a music video for "No Rules" to accompany the release of the single. The video is a shot-by-shot recreation of Billy Joel's epically cheesy "Sometimes A Fantasy" music video. For those of us who had "Glass Houses era Billy Joel reference" on our Autogramm bingo cards, this is a glorious moment (now fingers crossed that they eventually cover "All For Leyna"!). The song, featuring drummer The Silo on lead vocals, is essentially a new wave/synth pop dance track. Appropriately enough, it's a song about dancing. Hilariously, a song called "No Rules" begins with two rules. I love it! This tune really shows off Autogramm's musical versatility. This is a band that has given us moody new wave numbers and perfect pop tunes. Here, the group picks up the tempo with an upbeat banger that would have been all the rage in the dance clubs of 40 years ago. You can hear bits and pieces of some of the band's bedrock influences (e.g. Devo, The Cars), but there's also a punky energy to this song that I find truly infectious. And the video is an absolute hoot! No Rules will be out April 16th on Nevado Records!
-L.R.
https://open.spotify.com/album/1kPGfJURfUnwjjxxB4wbKt
https://www.autogramm.band/
https://www.facebook.com/autogrammband
https://twitter.com/autogrammband
Posted by Lord Rutledge at 2:57 PM