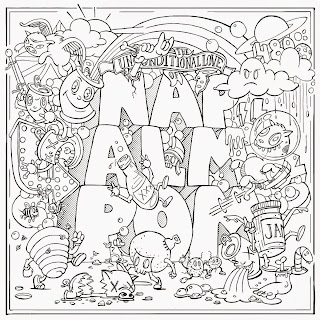 If "air guitar rock" is an actual genre, it's very underrepresented in today's scene. And that's a shame, since I partake in robust air guitar activities on a daily basis (let's hear it for gyms that still play classic rock on the PA!). Sadly these days when you do hear a band employing epic guitar solos or larger than life arena rock choruses, it's usually dismissed as some kind of ironic joke. Everyone throws up the horned hand and has a good chuckle. I don't get what everyone finds so totally hilarious about bands that aspire to rock out. Are you all trying to make Dee Snider cry?!

The good news for me is that riff rock is alive and well and thriving in the great city of Calgary. Is it a coincidence that The Flames have been winning ever since Napalmpom released an album? I think not! If Napalmpom are sometimes mistaken for a parody band, it's perhaps because they don't take themselves very seriously. They have a funny name and write epic rock n' roll songs about such topics as Greg Ginn's sweater and Nick Cave's ill-fated Gladiator 2 screenplay. But just because a band likes to joke doesn't mean it is a joke. And I can assure you that these fellas are completely serious about rocking. Having established themselves as one of Calgary's most beloved live bands, they're now poised for world domination with a debut LP that's chock full of arena-ready anthems. They refer to The Unconditional Love Of Napalmpom as "nine love letters to the history of rock & roll". And with a sound described as "MC5 bombast with Thin Lizzy dual guitarmonies, AC/DC showmanship, hooks only The Exploding Hearts could write and the down-to-earthedness of early Black Flag", this is definitely a band that swings for the fences. In the way it celebrates all things that rock, The Unconditional Love is a throwback to a time when kids plastered their bedroom walls with rock posters and flocked to packed stadiums to witness their musical heroes in all their deafening glory. I can't help but like a band that isn't kidding when it cites Boston as an influence.

While I naturally relate to Napalmpom on a kindred spirit level, it's also important to consider that these guys are exceptionally talented. Shawn Petsche and Craig Evans are a powerhouse guitar tandem in that Gorham/Robertson and Young/Young mold - firing out enough killer riffs and awesome solos to fuel a full night of air guitar heroics. PJ Lavergne definitely has the pipes and personality to front a bigtime hard rock band, and that rhythm section is tighter than the lid on a pickle jar. Calgary scene legend Lorrie Matheson (Fire Engine Red, National Dust) produced The Unconditional Love and really gets credit for pushing the band to make a debut album it could be proud of. Matheson and the band went to great lengths to capture a truly massive sound - and the result is a record that practically begs you to crank up the volume. Bookended by the natural show-starter "Guided By Volume" and the farewell/theme song "Napalmpom National Anthem", this set of songs does somewhat approximate the feel of a live rock n' roll event. And if these tracks are any indication, Napalmpom surely puts on one hell of a show! Running the gamut from '70s arena sing-alongs ("Get With Me") to Thin Lizzy-ish power balladry ("Feint Of Heart") to thumping Detroit rock ferocity ("Seamstress") to full-on stoner thunder ("Ashes Ashes"), this is an album that rocks hard but also rolls with the best of 'em. I'd like to rate it a ten out of ten, but it seems more appropriate to give it an 11 out of 11.

Napalmpom has made a rock n' roll record that's largely about rock n' roll. Such a concept will only seem silly if you're not a true believer in the power and glory of rock n' roll. When I think about today's music scene and what might be missing from it, full-blown rocking out is pretty high on the list. If more bands had their own theme songs and wrote lyrics about "riding a riff so good it caused a train to derail in Calgary", surely the world would be a better place. Or least a way more fun place. Blast this album at the loudest possible volume. And if someone walks in on you air-drumming like a maniac, don't even think about stopping!