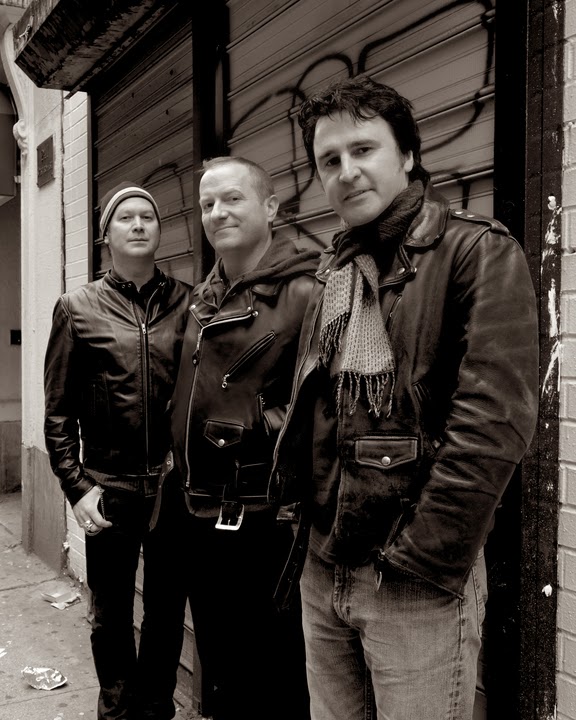 If you're a Figgs fan, Guy Lyons needs no introduction. Not only was he an original Figg, but he also wrote two of my favorite Figgs songs ever in "Bad Luck Sammie" and "Said Enough". He recently joined his former bandmates on stage for a live performance celebrating the 20th anniversary of the release of one of the greatest rock n' roll records ever made - The Figgs' debut album Lo-Fi At Society High. Can you believe it's really been two decades since that album came out? Seems like only yesterday!

Anyway, back to Guy Lyons. Last year he formed Blockhouses, a new band with bassist Christopher Peifer (The Kowalskis) and drummer Bill Wolf. With Jim Balga taking over on drums this year, the band's current lineup was set. Blockhouses just released a new single, "One More Time To Get Home" b/w "Little Sweetie". It's actually the New York City trio's third single this year, and of course it's totally killer! A band named after a fort should be rock solid, and that's clearly the point. Longtime Lyons fans will be pleased to know that he has not strayed a bit from the high energy power pop/rock n' roll he's known for. This single, as expected, delivers that perfect blend of muscular guitars and catchy melodies on a pair of high quality tracks. "One More Time To Get Home", once it gets in your head, is sure to stay there.

It goes without saying that Figgs fans will dig Blockhouses. And in fact, those two bands recently wrapped up a joint tour. While always one of rock's great sidemen, Lyons is a fine songwriter and singer in his own right. And again he finds himself fortunate to be part of an absolutely dynamite band. Check out all of Blockhouses' singles over at their Bandcamp - and let's hope for more from this band in 2015!