Year of The Cry! 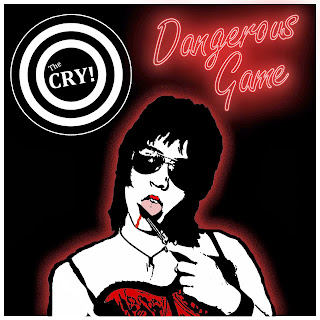 I know it's awfully bold to make an album of the year prediction on the first day of the year! You've got to be wondering what I drank last night. But I doubt the new album from The Cry! will be topped in 2014.

The Cry! has been one of this blog's favorite bands going back to the fall of 2011. Dangerous Game, the Portland outfit's second album, is set to release March 1st on SP Records out of Japan and Taken By Surprise Records out of Germany. I typically refrain from reviewing music before it's available for purchase. But in this case, I just could not wait two more months! This album is hot! While  frequently compared to a whole host of contemporary glam/punk and post Exploding Hearts pop groups, The Cry! to my mind is a class above them all. What I've loved about this band from the very beginning is that its songwriting and vocal arrangements are steeped in the timeless traditions of oldies and doo-wop. While all these guys are still in their early 20s, they show a tremendous appreciation for the history of rock n' roll and what made it so magical in the late '50s and early '60s. They craft the kind of music that you wish they still played on the radio. Dangerous Game finds The Cry! rocking harder than ever. But it essentially sticks to the formula that made that first album so great: fun songs about boys chasing girls, stacked with honeyed harmonies and memorable choruses that will compel you to sing along. As cool as their haircuts may be, The Cry! is about perfect melodies first and foremost.

Part of what's so appealing about Dangerous Game is that it's a 100 percent DIY production. No outside producers or engineers were involved in the making of the album - just the band members and manager/mentor Greybush. In a day and age when high-tech trickery and turd-polishing gloss rule the productions of the music industry, it's great to hear a band focusing on writing great songs and actually singing well. The backing vocals, such a stellar component of the first album, are even more intricate and impressive this time around. You can tell they worked really hard to get those harmonies tight. And with all four fellas contributing backups, it's truly a group effort. The material, while generally similar to the first album ("Nowhere To Go" and "Shakin'" are stone cold hits!), surprises in pleasant ways. "Discotheque" is a perfect distillation of the band's love for the classic pop/punk of The Boys and the bubblegum glam of Sweet. "Same Old Story" is a British Invasion throwback gem that ought to make the guys in The Connection jealous. And the straight-ahead high energy power pop of "Hanging Me Up" delivers perhaps the most hummable melody of The Cry!'s existence.

As always, The Cry! demonstrate a particular mastery of the finer details that make great pop. The melodic guitar lead is such a staple of modern-day powerpop/punk, and no one plays catchier leads these days than Brian Crace. And if there's one thing The Cry! is especially skilled at, it's crafting a hook line that no living human can possibly resist. "I ain't got/Nowhere to go" are six words that will be stuck in your head until the end of time. And a line like "Shakin', shakin'/Like a vibrator" may seem idiotic on paper, but once you hear it you will never be able to get enough. In a perfect world, it would spawn an international dance craze replete with YouTube sensations and a feature film. Hell, maybe it will!

With little room for improvement following such an extraordinary debut LP, The Cry! could only top themselves by taking advantage of their remarkable depth of talent. Ray is still the primary lead singer. But Brian sings lead on his three contributions to the album, and "Same Old Story" is written and sung by Dave. Having three talented songwriters in a band can never be a bad thing, and I love that there's no difference in quality regardless of who's singing. It all just sounds like The Cry! - which is a testament to the highly distinct pop/rock n' roll niche this band has carved for itself in just a short number of years. When I first heard The Cry!, I wondered if they'd ever be able to top "Modern Cinderella". Then I heard their album, and it was obvious that "Modern Cinderella" was no fluke! Clearly I wasn't the only one who noticed. The album sold out of four pressings, and is about to be reissued (again on SP Records). I consider it a modern classic of powerpop/punk. And Dangerous Game is even better. I promise!

really looking forward to their new album. i think this is probably my favourite blog, it's certainly steered me in the direction of some great music