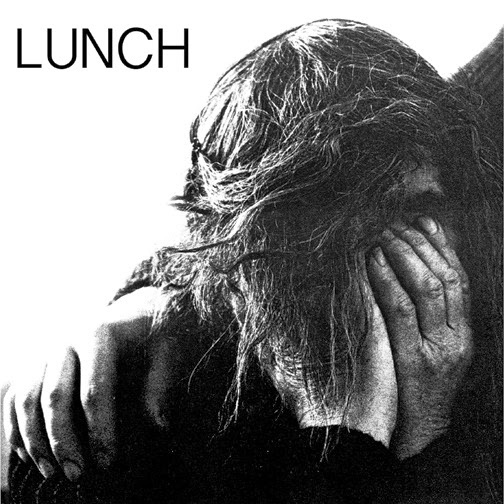 F & L head talent scout Greg Mongroll has been working long hours of late, regularly hunkering down in the war room well after midnight with large quantities of hard cider and huge stacks of records and tapes. He goes through thousands of demos, YouTube clips, obscure podcasts, and transcripts of ancient prophecies in search of that next band I absolutely have to hear. Someday I will compensate him with a rare copy of Mr. T.'s Commandments on gold chain vinyl. But for the moment, he's working for peanuts. Literally. I have a reliable hookup in Virginia.

Greg brought his latest find to my attention over the weekend, and I started working on my review within moments. It's hard not to like a band named Lunch. Lunch is one of the great things in life - particularly when it's accompanied by a fine German lager. And you know that if the illustrious Johnny Cat put out the record, it's gotta be killer. I'm prety sure the Good Housekeeping Seal of Approval was officially replaced by the Johnny Cat Seal of Approval sometime in the early 2000s. "Johnny Pineapple" is a new 7" release featuring four prime selections from the band's outstanding tape Quinn Touched The Sun. Lunch's sound is totally in my wheelhouse yet quite unlike anything I've heard before - a blend of garage, pop, and post-punk with an emphasis on quality songwriting and just enough noise to make it interesting. The title track is fast and poppy and so crazy catchy. Imagine the best elements of the Marked Men and early Replacements cross pollinated with Wire's guitar effects. "Slug Bones" brings to mind the heyday of Touch & Go Records, and surprisingly I don't hate it. If Jay Reatard had traveled back in time and cut a track with Joy Division, it might have sounded like "Monochrome Lust". And I give the closing cover of The Gun Club's "Sex Beat" very high marks. It's pretty faithful to the original, but with that distinctive Lunch touch I've really come to love over the last, uh, four days.

I think what I really dig about Lunch is that this is a true punk band playing post-punk - as opposed to some shitty indie rock band playing post-punk. That makes a big difference. There's an obvious level of sophistication and artistry involved in what they do. But when push comes to shove, they're delivering raw and energetic tunes that connect on a purely visceral level. Truth be told, all of Quinn Touched The Sun is great. Greg, ya done good!