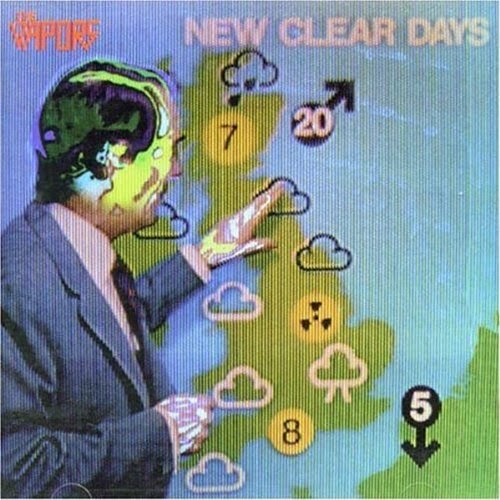 I once wrote a short story about a woman who so vehemently objected to her significant other's dismissal of The Vapors as a cheesy one-hit-wonder that she literally murdered him. My own stance on the matter is only slightly less passionate. The band's 1980 debut LP New Clear Days is my favorite album of all-time. The hit, "Turning Japanese", is well-known by all. If you don't like it, there must be something fatally wrong with you. The rest of the songs stick to the same new wave pop template, and are every bit as good. There is not a single track on the album that isn't totally great. Heck, even some of the songs that didn't make it onto the album are great! Often categorized as one of the standards of skinny tie power pop, New Clear Days actually transcends genre with its quirky sensibility and thoughtful lyrics.

As its title suggests, New Clear Days was a song cycle about love and life set against a backdrop of impending nuclear annihilation – overtly political in spots and otherwise informed by the tenor of Cold War times. While many of the best tracks ("Waiting for the Weekend", "Spring Collection", "Somehow") are simple variations on the songs-about-girls theme, few pop groups in 1980 were referencing military cease fires ("60 Second Interval") or World War II era nationalism ("Letter from Hiro"). The album's best track, "News At Ten", is a generational statement as pointed and literary as anything ever penned by Paul Weller (I always played Side Two first when listening on vinyl so the album would start with this song!). And David Fenton's lyrics to "Bunkers" read like something straight off the first Clash LP:

Fenton's songwriting muse would turn darker and weirder on the band's excellent second LP Magnets (the most accessible song was an ode to suicide cult leader Jim Jones!), and the album didn't even crack the top 100 on the U.K. charts. And that was all for The Vapors. To his credit, Fenton never gave in to the temptation to "unretire" from the music business. He gave up recording and became a solicitor. There have been no half-assed Vapors reunions or warmed-over comeback albums mimicking the new wave glories of yesteryear. The band's music remains in the early '80s, where it belongs - a cultural artifact as enduring and awesome as the Atari 2600, Billy Beer, and movies about truckers.

Thanks for writing about this sorely underrated band. Their 2 lps are near perfection. I may lean even more toward their second one. I wonder if 'Japanese' hadn't been such a massive hit, might they have lasted a bit longer - the 'one hit wonder' status seemed to doom them to irrelevance in most people's eyes.

I think you're right! The success of "Turning Japanese" had to have contributed in some way to the ending of the band. I believe Fenton called it quits after an A & R guy pulled the plug on a studio session they had booked for a new single. He just didn't feel like putting up with a label doing him dirty, and to his credit he just walked away.

"Unretired" from the music business over 2 years ago ... !