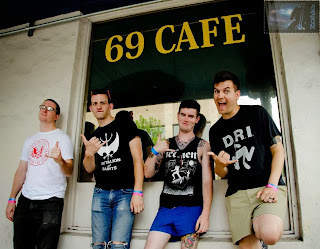 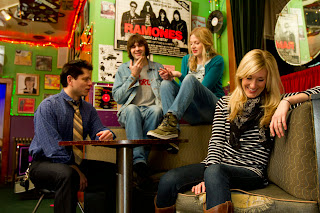 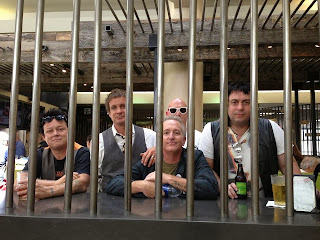 Holding strong to tradition, I once again bring the year to a close with my annual Lord Rutledge Awards. Due to a restructuring of the F & L operating budget (I purchased a trained monkey whom I'm convinced can write reviews as well as I can), I was unable to make this a live event this year. So picture me now seated by the fireplace, dressed in my smoking jacket, weighing in on the year that was 2013 while I sip a hearty winter ale from a boot mug and listen to Bloodstains Across Denmark on a 1963 Motorola console stereo. I briefly pause to sing along loudly, causing the cat to give me the death glare.

On more than one occasion over the past 12 months, I remarked on what an amazing year 2013 was for punk/garage/powerpop music. I don't know if there was anything special about 2013 in particular. Maybe there's lots of great music out there every year, and I just did a better job of finding it in 2013. Any way you choose to explain it, I've had an inordinate amount of incredible music to write about over the past 365 days. Several of my favorite bands (Night Birds, Missing Monuments, The Connection, The Kidnappers) delivered superb new releases. The Stiletto Boys returned after a 13 year absence and issued their long-awaited masterpiece Liberator. The Lovesores and Livids turned back the clock to the glory days of trashy punk rock n' roll. New bands like L.A. Drugz and Chain Letters became instant favorites of mine. I finally got hip to awesome groups like The Bloodtypes and The Love Triangle. Hell, even the almighty Replacements released new music! All in all, it was a musical year I'll fondly remember for a long time. On that note, I will now dispense the hardware.

Album of the Year:
Night Birds - Born To Die In Suburbia
Number one with a bullet. You can see my full top ten here.

EP of the Year:
L.A. Drugz- Outside Place
My favorite overall release of the year. This band will contend for the championship belt in 2014.

Single of the Year:
Kurt Baker- "Girl's Got Money" b​/​w "Yeah? Yeah!"
In spite of formidable competition from the likes of Smartboys, The Chain Letters, and Maniac, last year's album of the year winner collects another Lord Rutledge Award for his double A side bonanza from this past summer. If you're a big Kurt fan like me, I've got something special for you later this week. Stay tuned!

Song of the Year:
Wyatt Funderburk - "If I Ever Wanted Easier"
It seems like most epic love songs are about young hearts in the throes on passion. This one's about enduring adult love, and it really speaks to me. Talk about ending an album on a high note!

Split of the Year:
The Gaggers/The Stitches
Released on Rapid Pulse and No Front Teeth Records. Includes the best Stitches song in at least 15 years and an instant snot-punk classic from London's almighty Gaggers. You can (and must!) stream both tracks on the Rapid Pulse Soundcloud page.

Album of the Year (Masters Class):
Swingin' Utters - Poorly Formed
This award goes to the best album released by a band that's 25 years or more into its existence. The Swingin' Utters have somehow managed to mature and consistently reinvent themselves over the years without losing the qualities that made them a great band to begin with. That's really hard to do, especially in the punk world. I also considered Bad Religion's strong effort True North for this award. But the difference is that Poorly Formed is one of the Utters' finest albums, while I'd say True North is nowhere near the top tier of Bad Religion LPs.

Producer of the Year:
Pierluigi Ballarin
Miss Chain & the Broken Heels' The Dawn was one of the year's finest LPs and all in all one of the "warmest" and best-produced records I've heard in years. Much credit has to go to Ballarin, who produced the album at his analog based T.U.P. Studio in Italy. Keep an eye on this guy!

Cover Song of the Year:
The No Tomorrow Boys - "I Go Ape" (Neil Sedaka)
You may be surprised by how hard the original (Sedaka's second single, from 1959) rocks. But The No Tomorrow Boys take it from inside the five and power it into the end zone. Find it on their Teen-Age Vice EP!

The Patrick Bateman Prize For Excellence In Music Criticism:
Kevin McGovern
It's no surprise that one of the great punk lyricists of my generation would attain a similar excellence in writing about music. Even though I myself write lots of record reviews, I'm generally not a fan of reading them. I always make an exception for Kevin, who contributed many classic rants to Now Wave Magazine back in the day. Whether he's writing a song, a Facebook post, or a grocery list, Kevin is always uniquely Kevin. Check out his blog for some amazing write-ups about life and music and what it all really means. This review in particular sums up his greatness.

Blog of the Year:
Audio Ammunition
By far the best taste in music of any blog out there. Since I don't do band interviews, it's cool to see another blog that does them really well. Check it out!

Label of the Year:
Grave Mistake Records
This was a mighty close battle as Dirtnap Records nearly took it for the second year in a row. But on the strength of delivering my #1 and #5 albums of the year plus great new EPs from The Shirks and Red Dons, I give it to Grave Mistake by the narrowest of margins.

Best New Band:
L.A. Drugz
Runner up was Maniac - because Justin Maurer likes to compete with himself.

Vault Treasure of the Year:
The Prostitutes - Get Sicker
With all The Prostitutes' classic material out of print for years, it's a thrill to have this digital collection available for a free download. At a lean 14 tracks, this is the most essential stuff from (in my opinion) the greatest punk rock band of the '90s. If you only take one recommendation from me all year, let this be the one.

Compilation of the Year:
Neighborhood Brats - No Sun No Tan
Compiling the Neighborhood Brats' out of print first three singles along with two unreleased tracks, this collection is an absolute must-own whether you're 17 or 47. Classic punk rock in the Avengers/VKTMS mold featuring the remarkable Jenny Angelillo on vocals. Without a doubt, one of the best punk bands going today.

Music Video of the Year:
L.A. Drugz- "Outside Place"
Winning three Lord Rutledge Awards in one year entitles you to a free pizza. Toppings are extra.

Album I should have bought, but didn't:
Glass Heroes- Liars Cheats and Thieves
I have never written about this band. That's a failure that needs to be corrected soon.

The Championship Belt:
Something Fierce
This award goes annually to my favorite current band. Something Fierce has held the belt since the inception of the award. And although they released no new music in 2013, I am not yet prepared to strip them of their title. With a new Something Fierce album due out in mid-to-late 2014, the band will have every opportunity to retain the belt in a fair fight.

Happy New Year, everyone! Thank you for reading!

Podcast of the year...can I get a witness?