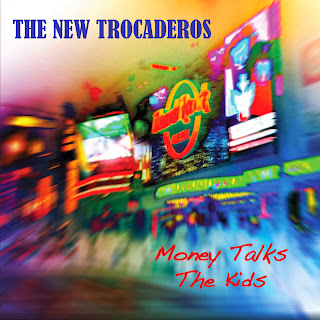 Talk about a dream team! The New Trocaderos are Brad Marino and Geoff Palmer from The Connection plus the great Kurt Baker doing power poppin' rock n' roll. That's three of my favorite guys in today's rock scene, playing the kind of music that's nearest and dearest to my heart. They've joined forces on this project to record two all-new songs written and produced by their good friend Michael Chaney. If at this point you'd prefer to stop reading and just go listen to the single, I wouldn't blame you! Knowing who's involved here, you don't need me to tell you it's good!

Marino handles lead vocals on "Money Talks", a revved-up golden oldies rocker with hot guitar licks, a knockout sing-along chorus, and harmonies out the wazoo. Not surprisingly, it sounds like it could be a Connection song (and a good one at that!). In the grand tradition of rhythm & blues and early rock n' roll, the lyrics tell a story - one that's as relatable now as it would have been decades ago. Ahhh, the things a man will do for the love of a woman...

With Baker on lead vocals, "The Kids" is exactly the kind of rockin' pop anthem you'd expect. I'm really moved by Chaney's lyrics - which celebrate the salvation rock n' roll music can be for a young person growing up in this world and struggling to make sense of it all. It's essentially a love letter to all the musical greats who have given us all those good times and kept us sane through the bad times. And since it's a pet peeve of mine when songs about rock n' roll kind of suck, it's so great to hear a song like this that genuinely epitomizes what the lyrics are conveying. This is the kind of tune that would have been playing at full blast while you were out with your friends on one of those magical Friday nights of your youth- rocking your worries away and living for the moment. And because of the timeless sound of The New Trocaderos, you'll relate no matter what your age.

What I really dig about this single is that it recalls a time in rock n' roll when the individuals who produced records were artists in their own right - and there was no shame in finding incredibly talented people to perform the music you wrote. I really hope that this is not the last we hear of The New Trocaderos. I love the concept, and more importantly I love the songs! CD pressing is extremely limited, so hop to it!

http://thenewtrocaderos.bandcamp.com/
Posted by Lord Rutledge at 7:23 AM

A million thanks to Lord Rutledge for his deeply insightful understanding of the intent of The New Trocs' songs, beautifully articulated. Lord Rutledge totally gets it.