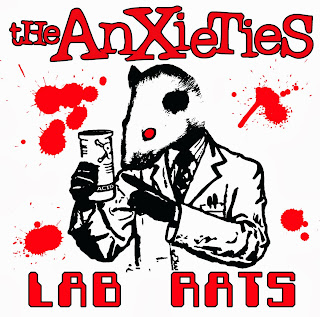 These are very exciting times in the world of The Anxieties! The Portland band has a brand-spanking new 7" out called "Lab Rats" and has also made its "lost" album Under Surveillance available as a name your price download.

When The Anxieties issued Return To The Nowhere Zone two years ago, I was really blown away by how far the band had come from its earlier releases. So naturally, I was stoked about this current lineup releasing more studio material. We finally get some with "Lab Rats" - and as expected this is the best stuff yet from Scott VonRocket and his partners in thoughtcrime! The Anxieties have fully realized the sound they've been working towards all these years. Think classic early '80s So-Cal punk (Adolescents, Agent Orange, D.I.) with a contemporary dystopian motif. If Snake Plissken had an iPod, these songs would be on it. This time out, it's less science fiction and more science fact - with songs about society's enslavement to the corporate/pharmaceutical complex and man's growing disconnection from the modern world. The title track is a fast and frantic ripper with the best lead guitar work I've ever heard from The Anxieties. "The Obsolete Man", the only truly "new" song on the record, is in a similar vein and really plays up the surfy riffing. "Friday Night", written and sung by (now former) bass player Matt Adore, closes the record with something a little different from The Anxieties. It's more Misfits than Adolescents - coming on with a sing-along rockin' style and cool "ohh ohh" backups. It actually reminds me a little of The Bodies (remember them?). While it's kind of an oddball track compared to the other two songs, I really like the variety it adds. It's a fun song to cap off the record, and you locals should definitely hope it remains in the band's set!

Under Surveillance was recorded way back in 2009 but never released due to a series of obstacles the band encountered (members quitting, a van breakdown, a cancelled tour). Finally it sees the light of day, and I'm very glad it does. Two things come to mind as I listen to Under Surveillance. One is that The Anxieties are a very different band now than they were then (which makes sense, since VonRocket is the only remaining member). And the other is that it's a freaking killer record! You can hear hints of what The Anxieties have become - touches of surf guitar and the techno-totalitarian themes of the title track. But if you're not familiar with some of the band's older recordings, you may be surprised to hear such a high degree of Ramones and Rip Off Records influence in these songs. And some of these tunes are among my favorite Anxieties tracks ever. "Staring Daggers" is a snotty, high-energy blast, while "Telepathy" is a ripping '77 punk/new wave mash-up a la The Fuses. And if these guys have never opened their live show with the super-fun "T​-​Minus Four", they really ought to consider it! Hearing this album helps me understand how The Anxieties got from The Next Mutation to Return To The Nowhere Zone. It wasn't like they procured performance enhancing substances from the future and became a new band overnight. In fact, if I put Under Surveillance and Return To The Nowhere Zone up against each other, I'd have to say they are very different but equally good. And I love Return To The Nowhere Zone!

"Lab Rats" should be out on vinyl within the next couple of weeks. It's already available digitally for $3. Head on over to The Anxieties' Bandcamp page for ordering information. You can also download Under Surveillance for free or perhaps kick in a few dollars that might help these guys fund their next LP. Do it before Big Brother forbids it!