Jake and the Stiffs - The Singles! 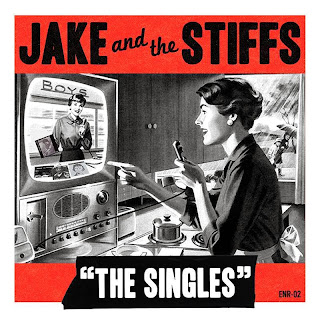 Of all the criminally overlooked and under-appreciated punk rock bands of the '90s, Delaware's Jake and the Stiffs were to my mind the most criminally overlooked and under-appreciated. They shoulda been huge! They were doing the '77 punk meets power pop thing long before it was cool, and anyone who ever saw them surely concluded that they were worthy of a prime slot on the roster of some "big" punk label. They were a knockout live act, and their supply of great songs was seemingly endless. Perhaps in their day, they were too pop for the punk crowd and too punk for the pop crowd. Singer/guitarist Randy America was and still is an incredibly talented songwriter, and Algy Siouxcide is easily one of my favorite bass players of all-time. Am I wrong in stating that "Jennifer" was the best song of the '90s? Name one that was better!

As its name implies, The Singles collects all the tracks from the four 7" records released by Jake and the Stiffs between 1993 and 1997 - Steal This Record, Spike, "Pot Belly Pete", and "I Like Girls". Randy America remixed and remastered the original tracks at his Norad Studio in Pike Creek, Delaware - and they sound awesome! Now after all these years of me proclaiming the unacknowledged greatness of Jake and the Stiffs, you can finally find out for yourself if I was full of shit! While hopefully just the first of several JATS reissues you should expect this year, The Singles has all the hits (or the should-have-been hits). Given that there was close to zero market for this kind of music in the early '90s compared to the exploding popularity of powerpop/punk in recent years, I'm excited for a whole new generation of fans to discover JATS favorites like "Holly", "Scrappy Come Home" (who isn't a sucker for a song about a dog?), and "High School Blues". You also get two versions of "All I Said" and some lesser-known gems like the terrific "TV And My Baby". And don't get me started on "Jennifer". It's got one of the catchiest melodies ever, and the lead guitar parts and bass lines ought to be the stuff of legend.

Loaded with classic originals and some standout covers ("Lonely Boy" from The Great Rock 'n' Roll Swindle soundtrack and The Know's 1980 power pop anthem "I Like Girls"), The Singles is a perfect summation of why Jake and the Stiffs are one of my all-time favorite bands. With any luck, it will sell enough to cover the costs of making it and allow for a few more reissues from the JATS vaults. Get it cheap from CD Baby, and be sure to check out Randy America's solo album if you haven't yet!

Sell music on Amazon at ReverbNation.com

Get this. Quickly. Greatest Delaware band EVER, period. And while I know that doesn't sound like a weighty honor, I'm pretty sure they'd kick most other states asses too. Definitely North Dakota.