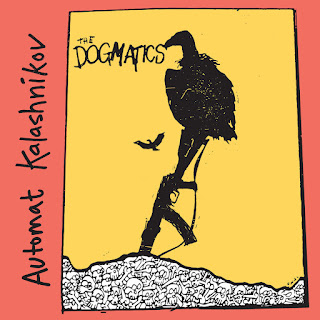 Well here was a pleasant surprise! It's no secret that The Dogmatics are my favorite of all the great garage/punk/rock and roll bands from Boston. Releasing today on Rum Bar Records is a brand-new Dogmatics single titled "Automat Kalashnikov". This is the first new music released by the band since 2019, and it's the first Dogmatics song ever to be written and sung by Peter O'Halloran! My immediate response to this track was that it sounds like vintage Dogmatics. If you told me this was recorded 35 years ago, I wouldn't doubt you for a second. You could slip in this song anywhere on the EST 81 compilation, and it would not sound out of place! It's the kind of punk rock tune that will hit you with a jolt of energy and then quickly get stuck in your head. Seriously: what an earworm! The single is being released on CD (available next week) and orange flexi vinyl (available February 28) with The Dogmatics' classic "You Say" on the B-side. Stay tuned for much more new music from The Dogmatics in 2022!
-L.R.
https://rumbarrecords.bandcamp.com/album/automat-kalashnikov
https://www.facebook.com/thedogmatics
https://www.facebook.com/RumBarRecords
Posted by Lord Rutledge at 7:02 AM