WhistleStop Rock - "Queen of the Drive​-​In" 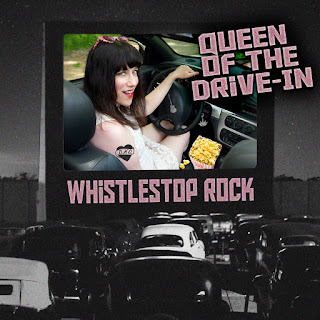 The WhistleStop Rock Festival has spawned its own supergroup! WhistleStop Rock was created last year when nine of New England's top punk/power pop/rock and roll bands united to form a woman-empowered concert festival. The bands are The Chelsea Curve, Cold Expectations, Field Day, Heather Rose In Clover, Justine and The Unclean, Kid Gulliver, The Knock Ups, Linnea's Garden, and Tiger Bomb. The festival has also featured special guests such as Tanya Donelly, Joyce Raskin White, Seana Carmody, Lockette, and The Shang-Hi-Los. The WhistleStop hit several New England towns earlier this year. Even after the pandemic arrived, the festival has continued with virtual shows.

Recently the women of WhistleStop made the leap from playing shows together to making a record together! They were exchanging stories about good times they'd had at drive-in movies (hint: they were totally unrelated to the movie!). Justine Covault (Justine and The Unclean, Justine's Black Threads) thought that sounded like a great song idea. Within a day, Simone Berk (Kid Gulliver, Sugar Snow) and Linnea Herzog (Linnea's Garden, PowerSlut) had co-written the perfect summer pop song. And just like that, WhistleStop Rock was a band! Joining Berk (lead vocals) and Herzog (guitar) for the recording of "Queen of the Drive-In" were Covault on guitar, Linda Bean Pardee (The Chelsea Curve) on bass, Sandy Summers (Kid Gulliver) on drums, Heather Rose on stylophone and backing vocals, Lynda Mandolyn (Tiger Bomb, Crystal Canyon) on backing vocals, and JoEllen Saunders Yannis (Cold Expectations) on backing vocals. What a group!

"Queen of the Drive-In" is exactly the power pop/rock and roll smash you'd expect given the contributions of all these talented individuals. In the grand tradition of musical odes to the drive-in, this song is very, very naughty! Berk's lyrics are hot, hilarious, and totally fantastic. In the interest of keeping this blog PG rated, the only line I will quote is "What did we see? I'm not paying attention". Berk delivers a perfectly dirty-sweet vocal, and you will not hear a catchier song this summer. The single is already available from Bandcamp, but the women of WhistleStop Rock have something special planned for the official release of this single. Each performer on "Queen of the Drive-In" appears in a music video produced by Daniel Ouelette. The video will premiere tomorrow night as part of a virtual WhistleStop Rock show on Facebook. All of the WhistleStop bands will be performing, as will special guests A Bunch of Jerks and The Shang-Hi-Los. The show will be live tomorrow from 7:30-9:30 Eastern time. In the meantime, give "Queen of the Drive​-​In" a listen. And check out all the cool bands I've linked below!