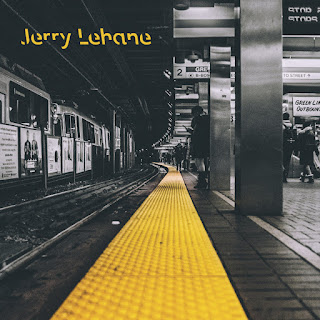 What was I just saying about Rum Bar Records having become home base for the best of Boston rock and roll? It doesn't get any more "Boston rock and roll" than The Dogmatics. And today Rum Bar releases the debut EP from Dogmatics singer/guitarist Jerry Lehane. Incredibly, these recordings had gone unreleased for 29 years until today. Talk about an unearthed treasure!

These five tracks were recorded over a three-day period in 1991 at the Cars-owned studio Synchro Sound. Lehane made a special deal with sound engineer Tom Hamilton that allowed him to record the EP on the cheap by going in after midnight. Lehane, who was between bands at the time, enlisted the services of several talented friends to play on his debut solo record. This included Charlie Chesterman (Scruffy the Cat, Harmony Rockets, the Motorbikes), Chris Doucette (The Galley Slaves, Witch Doctor, Hotbox), Danny Coughlin (Children of Paradise, Lazy Susan, Eric Martin & the Illyrians), Chris Erikson (Sacred Cows), Randall Gibson IV (Scruffy the Cat, The Flies, the Illyrians), Lance Hewitt (Timmys), and Scott Seiver (Ted Leo, Tenacious D, John Legend, Pete Yorn). It's just so cool to envision all of these amazing musicians gathering late at night to cut a record! At this point, you may be wondering why it took almost three decades for this EP to see the light of day. There does not appear to be a good answer to this question. Thankfully, Malibu Lou heard these songs and immediately wanted to release them. The original plan was for Lehane to record three brand-new songs with Ed Riemer and create a mash-up of old and new. But then came the pandemic, and all of that went out the window. So what we have here are five tracks out of the 1991 time capsule that really hold up. If you're expecting a Dogmatics feel, well there's certainly a little bit of that. You'll hear the guitars that open "Kiss My Tattoo" and instantly know who you're listening to. And the rocking and rolling "Fish" could easily pass for a lost Dogmatics track. But over the course of these five songs, Lehane covers a good deal of musical territory. "Kiss My Tattoo" is high energy garage rock, Boston style. "Runaway With You" is a Stonesy barroom ballad that Lehane's current label mate Tom Baker would be proud to have written. "All I Can Do" is twangy, aching, and reminiscent of the Replacements.

Several of the songs on this EP, including the raging "Kiss My Tattoo", were written in the aftermath of a painful breakup. It has to be a little weird for Lehane, now happily married for over two decades, to hear these songs and relive that particular moment of his life. But in purging himself of some unpleasant memories, he created some remarkable music. And then there's the excellent "Feel Like Dying" - a song about a soldier heading off to the Gulf War. That might seem very specific to 1991, but the themes of the song are every bit as relevant and impactful today. It's amazing how a 29-year-old EP fits in so seamlessly with the rest of the music coming out on Rum Bar Records today. Then again, that kind of makes sense. There's a long list of current Rum Bar artists who would consider The Dogmatics and Jerry Lehane to be huge influences on their songwriting and musical style. Hopefully by next year, we'll hear those new solo tracks. Jerry Lehane is a national treasure! Be sure to check out this recent interview he did with Anngelle Wood!