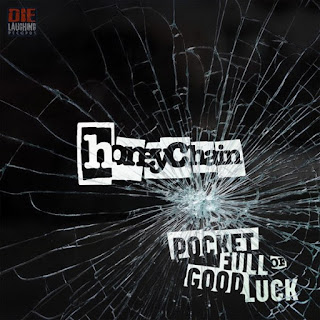 The terrible year 2020 continues to be one of our best years in recent memory for music. Joining  a superb slate of 2020 album releases is the second long player from Los Angeles trio honeychain. Pocket Full Of Good Luck is the band's first release on Die Laughing/Golden Robot Records. It was recorded, produced, mixed, and mastered by singer/guitarist Hillary Burton. It follows 2017's CRUSHED, which in my book is a modern classic of power pop.

A lot of you know Burton as the drummer in The Pandoras, but she's been releasing music under the honeychain name since 2013. The current lineup, which includes Andre Tusques on bass and Loye Aubrey Jr on drums, sounds awesome. Over the years, Burton has developed a signature style of songwriting that incorporates influences from numerous eras and genres. While honeychain is definitely a classic Southern California sun-soaked punk pop group, the band's sound owes just as much to early '90s alternative rock, the pure pop of the '60s, and modern day garage rock. I would have had zero complaints about a repeat of CRUSHED, but Pocket Full Of Good Luck does not settle for just more of the same. It's a fine example of how a great pop band ought to progress. It takes everything I liked about honeychain and adds so much more. Songs like "Go Away" and "Great Big World" capture the vintage honeychain punky power pop sound in all its glory. On the other hand, songs like "Spaceman" and "Flee Los Angeles" take the heavy guitar '90s alt-rock inspirations of the band's previous releases and push them front and center. "Flee Los Angeles" in particular will rock you straight back to 1993! This album is such a pleasure to listen to because it gives you a little bit of everything. "Beautiful Now" is haunting and gorgeous. The title track is a punk rock thrill ride. "Chemtrails" is bittersweet pop at its absolute finest. "289" is pure garage rock and an absolute blast. And then there's the stunning "Late Night Movie Show", which Burton co-wrote with her dear friend Kim Shattuck. It closes the album in a beautiful and memorable manner. It's just so heartfelt, sweet, and moving in a completely unpretentious way. I find myself focusing on the significance of every word Burton sings. As I imagine every other honeychain fan listening to this song with me, there won't be a dry eye among us.

With now two great albums to its name, honeychain has established itself as one of the finest pop/rock bands of the present day. And Hillary Burton is such an amazing songwriter! Pocket Full Of Good Luck picks up where CRUSHED left off and moves several steps forward. It's all the best of pop, rock, and punk mixed together in cool and creative ways. It sounds like a million bucks, and the songs are fantastic all the way through. Click here to listen or buy!