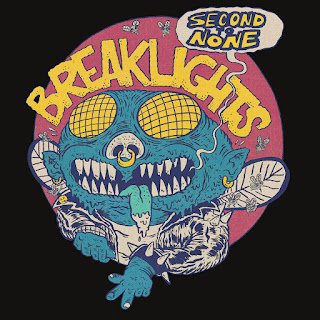 Wow, time really flies! As I sat down to review Breaklights' new 7", I was surprised to discover that it's been four years since I last wrote about this Austin, Texas based band. "Second To None", out now on Otitis Media Records, is actually the band's first 7" following a couple of EPs. On this release, Breaklights retain their signature sound rooted in '90s/early 2000s melodic punk and pop-punk. I like to call it "pop-punk for grown-ups": powerful, melody-driven music with mature lyrics and a nice mellow vibe. This release was produced by FILMAGE director Deedle LaCour, and it sounds amazing. Breaklights have always sounded to me like a punk band from the '90s that would have been on a major or bigger indie label. They fully embrace big hooks and a polished sound, but that punk edge is still there. "Second To None" pairs Charlie's warm vocals and heartfelt lyrics with punchy guitars and a soaring energy. Although this song does not even reach the three-and-a-half minute mark, it has a grand, anthemic feel to it. The band does something a little unconventional with the arrangement of the song towards the end. I won't spoil the surprise other than to say that I enjoyed this little twist. "Overdue" is the flip side (literally) to the feelgood vibe of "Second To None". With an opening line like "Hanging around someone like you/Is a real bad time for two", you know exactly what you're in for. This is an honest analysis of how things can go wrong between two individuals, and I think a lot of people will relate. Again, this is a perfect example of how pop-punk can sound fully "mature" and still pack a serious punch. This is a great-looking 7" and a top-notch pair of songs from Breaklights. If you missed the band's 12" EP Don't Try So Hard from 2018, that's really great as well and definitely work checking out!