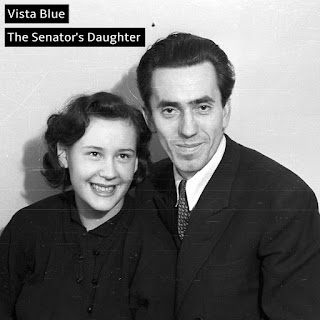 Here it is: my 25th Vista Blue review! I feel like I should be awarding the band something silver to celebrate this occasion. Baseball bats? Scooters? Faster & Louder varsity jackets? I'll have to see what's in the budget. You may have noticed that Vista Blue has been a little less prolific than usual this summer. That's because their alter egos Ralphie's Red Ryders have been hard at work on a full-length album that will be coming out on this Christmas on Outloud Records. In the meantime, the band has released an EP of odds and ends centering around its recent cover of the Fountains of Wayne classic "The Senator's Daughter". Those of you who are Fountains of Wayne fans are probably familiar with this track already from the wonderful free tribute album that Radiant Radish released back in May. If for some bizarre reason you are not a Fountains of Wayne fan, perhaps this song will be new to you. I love how this interpretation honors the original version yet still sounds very much like a Vista Blue song. It's terrific! "Colt Cabana #1" was originally recorded as a perk from the Kickstarter campaign that funded Vista Blue's curling-themed split with The Zambonis. The band pledged to record an entire EP of songs about professional wrestler Colt Cabana, and now you get to hear one of those tracks! "Cactus!" was written for the Phone Losers of America prank call network and was actually played as intro music on an episode of The Snow Plow Show. I never imagined that repeating the word "cactus" for 24 seconds would yield such brilliant results. But man, it totally works! "Four Seasons" is the original demo for the lead track off of The Kids Still Don't Like It, the kid-friendly record the band released back in 2018.

I like that "The Senator's Daughter" is a release for Vista Blue super fans. And if you’ve read this far, a Vista Blue super fan is exactly what you are. As a fan, I love that this band is willing to do fun things like make entire EPs for kids, write songs about pro wrestlers on demand, and submit unsolicited theme music to prank call podcasts. If you've never heard Vista Blue before, start with Hit the Floor! and work your way through the catalog from there. For the rest of us, "The Senator's Daughter" is tremendously satisfying fan service. I can't wait for the next 25 reviews!