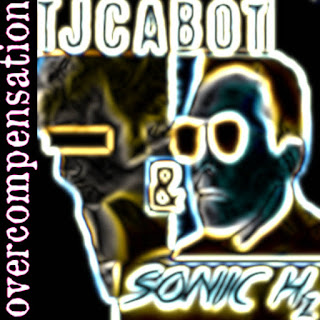 So it had to happen that two of Moncton, New Brunswick's most celebrated musical entities would join forces. All of Atlantic Canada has responded with shock and awe. On the surface, this seems the most unlikely of marriages. You've got the retro synth wave of Sonic Hz crossing paths with the DIY trash-punk of TJ Cabot. It's like Vangelis meets hardcore Devo, or The Screamers giving Jan Hammer shock therapy. Details on how this collaboration came about have been suppressed due to an ongoing contractual dispute between TJ Cabot and his band-mate Millhouse Deville over the rights to several unreleased tracks and a Rollie Melanson rookie card. However, the message board chatter indicates that TJ Cabot and the artist known as Sonic Hz were seen congregating at an abandoned '80s shopping mall and exchanging ideas about a shared musical vision that no one ever dared to anticipate. "Overcompensation" turns out to be the perfect fusion of two disparate musical worlds. It's as if TJ Cabot's '70s robot punks climbed aboard one of Sonic Hz's '80s spaceships and created a soundtrack for a movie that would only be available today on VHS. This song is something very different for TJ Cabot (it would not be the same track without the synths), and it's totally unlike anything you've heard from Sonic Hz. And at three minutes, it's twice the length of the average TJ Cabot track. So you're getting more bang for your buck (actually the track is free, so really it's more bang for no bucks). If this song is not already being piped into retail stores, public parks, and medical facilities all throughout the greater Moncton area, it is up to you citizens to submit your requests.