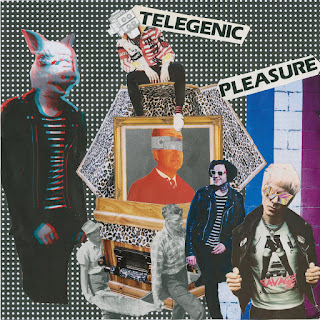 Now here's a real super-duo for you! Telegenic Pleasure is Marco from No Front Teeth Records, The Gaggers, Miscalculations, Disco Lepers, Stalin Video, etc. teaming up with Rob from Isolation Party, Klazo, Mononegatives, etc. You could say that both of these guys are kind of prolific! Together they've just released their killer debut album on No Front Teeth. This is London, England meets London, Ontario, and you know to expect something unique and cool with these two involved! I love the vibe of this record - it's synth-punk with an emphasis on the punk. These songs are dark and weird and raw and sharp, perfectly mixing first wave U.K. punk with art-damaged new wave and post-punk. Marco's snot-bomb vocals are immediately recognizable, and there is much shared musical DNA here with his other bands. I'd say Telegenic Pleasure is a little more "punk rock" than Miscalculations and clearly more electronic/futuristic than The Gaggers. But these songs also have Rob Brake's signature all over them. He has envisioned a chilling soundtrack for a doomed post-modern world. Songs run the gamut from abrasively raging ("Sealed Off") to more robotic dystopian ("Vision Burns"), with stops at all points in between. Whether you're more into the synth or the punk, this is an album you are sure to enjoy (although I don't know if "enjoy" is the most suitable word!). As is often the case with NFT releases, there are multiple versions of the LP release for you to check out if you're a collector of cool things. Get on it!