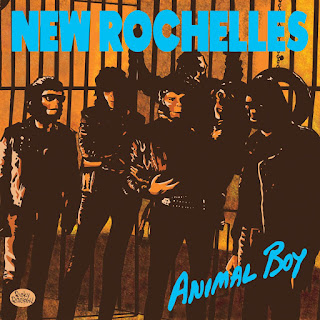 I have officially come full circle on Ramones cover albums. I went from thinking they were the coolest thing in the world to finding them utterly pointless. I had gone a decade plus without having the slightest urge to listen to any of them. But the New Rochelles covering Animal Boy in its entirety has pulled me back in. This, to me, is where it starts to get truly worthwhile to revisit the Ramones catalog. Animal Boy was released in 1986 - essentially the mid-point of the Ramones' existence. Is it a great Ramones album? Well that depends on who you ask. A good portion of the fan base will still defend a lot of the songs. But can anyone really defend the production? Certainly the Ramones struggled for most of the '80s to find a producer that "got" them. But Animal Boy seems the most blatant example of a failed attempt to commercialize the greatest band to ever walk the earth. It's certainly the most "'80s" sounding release in the band's catalog - and not in a good way. With the New Rochelles being true believers in all things Ramones, they were more than worthy candidates to re-make Animal Boy and perhaps demonstrate what the album could have been. This is the debut release on Hey Pizza! Records - a new pop-punk label with a whole lot of hot stuff in the works!

What's noticeable about the New Rochelles' interpretation of Animal Boy is that it has great reverence for the original - warts and all. You can tell they love this record and wanted to pay proper tribute to it. The band chose to retain the use of keyboards, and I was struck by how similar the vocals on "Somebody Put Something In My Drink" sound to Joey's on the original version. Even when you're dealing with a somewhat polarizing Ramones album, you probably don't want to reinvent the wheel. But while all these versions are largely faithful to the originals, I am pleased to report that the dated '80s production has been updated to sound more like a modern pop-punk record (Yeah, I know some of you wise guys will say that that's even worse!). In particular, "She Belongs To Me" and "Something To Believe In" have been made over in such a way that ought to appeal to fans of post Lookout! Records pop-punk. I'm definitely having a "Hey, are these songs better than I thought?" moment with those two tracks.

Beyond the collectable/novelty factor, I think the whole point of covering an entire Ramones album is the attention it brings to the original version. It had been a while since I'd sat down and listened to Animal Boy. Of course "Bonzo Goes To Bitburg" is great. But upon revisiting the album, I was reminded of several other tracks I absolutely love (the title track, "Love Kills", "Crummy Stuff"). In much the same way that Boris the Sprinkler's version of End of the Century caused me to re-think my entire stance on that particular Ramones album, the New Rochelles have led me to see Animal Boy in a more favorable light. I can't imagine a fan of the New Rochelles not already owning all of the Ramones albums. But if this is your introduction to Animal Boy, it ought to make you want to hear the original. And if this is your first time hearing the New Rochelles, you may be impressed enough to seek out their excellent full-length It's New Too! Anything in this world that encourages more Ramones worship is a worthy endeavor in my book. So I'm giving a big thumbs-up to all parties involved in this project. Now who will dare to take on Halfway To Sanity?

Posted by Lord Rutledge at 6:30 AM

The Kobanes already covered "Halfway to Sanity." And they did a good job! I'm eager to see who will step up and take "Brain Drain."