Gino and the Goons - Do The Get Around 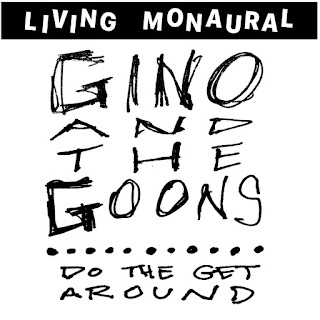 Any "greatest rock and roll band on earth" conversation that excludes Florida's Gino and the Goons is hereby declared illegitimate! And fortunately we now find ourselves in the season of Gino and the Goons - the music gods' reward to us for persevering through trying times. It began in September with Black Gladiator/Slovenly's full-fledged release of the band's phenomenal third album Rip It Up (the world demanded more than 300 copies of that thing!). It continues today with the arrival of the band's fourth album Do The Get Around. It culminates next month with the release of the band's fifth album Off the Rails (on the venerable Big Neck Records!). So unless you were one of the lucky few that got your hands on Rip It Up last year, you're looking at getting three new Gino and the Goons albums in one three-month period. As they say: Christmas has come early!

Rip It Up was perhaps the most acclaimed record of 2018 within budget rock/garage punk circles. The Black Gladiator reissue ensures that this blistering slab is now available to all who desire it. And with digital mastering handled by Tim Warren, you are guaranteed to have your ears melted upon contact. Head on over to the Slovenly Recordings Bandcamp to get in on the action! Out today on the always terrific Drunken Sailor Records, Do The Get Around is far from a rehash of its predecessor. If Rip It Up was the best '90s garage punk record released this decade, Do The Get Around is its rowdier, sleazier, and far more boozed-up companion. It's definitely an album fit for a drunken sailor! Gino and the gang dig even deeper into the blues, country, and primitive rock and roll on this 10-track smasher. The songwriting is so authentically old school that I had a few of these tracks pegged as possible covers. But besides the 1959 Dale McBride rockabilly side "Prissy Missy", these are all Gino and the Goons originals. "Pills In My Pocket" brings to mind The Replacements when they were young, wild, and rarely sober. "Take It Off" is quintessential budget trash and not exactly politically correct (hint: it's not about reducing the federal deficit). "I'm Your Man" is punked-up rhythm & blues slop that could just about bring Johnny Thunders back from the dead. The raucous "SAMF" is most definitely NSFW.

What can be said about Gino and the Goons other than that this band has just got it? You look to some bands for the bad-ass attitude, others for the killer tunes, others for the musical chops, and others for the unassailable set of influences. But Gino and the Goons are the rare band that can check off all of those boxes. They get that rock and roll ought to be raw, unruly, and played excessively loud. Put on Do The Get Around, and whatever space you're currently occupying will be transformed into your own personal dive bar. With you possibly having to choose between three Gino and the Goons albums for purchase, you may be seeking my guidance on how to prioritize. I will gladly oblige. Sell a kidney, donate some sperm, and settle for the cheaper toilet paper. You gotta have all three records! Order your Do The Get Around vinyl here!