The Cheap Cassettes - See Her In Action! 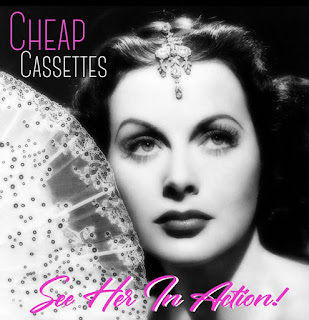 God, I love these crazy far-out digital times! You can wake up to what you think will be an another uneventful Tuesday, and suddenly a quick foray onto social media has you discovering that one of your three favorite bands on the planet has released a new EP that you didn't even know was coming out! Considering that most bands tease their new stuff weeks or even months in advance, that sort of surprise is a real treat! See Her In Action! is The Cheap Cassettes' third EP and first to be released exclusively in the digital format (at least for now). I know you'd probably expect me to say that this is the best thing this band has ever done. And of course I'm going to say it, but only because it's true! These tracks were recorded in June by drummer Kevin Parkhurst and subsequently mixed and mastered by living legend Kurt Bloch. And so here we are!

While generally typecast as a "power pop" band, The Cheap Cassettes could just as easily be filed under catchy punk or rootsy rock and roll. I think what strikes me the most about these songs is how they reflect Chaz's recognizable style as a songwriter far more than any sort of conformance to a genre. In these songs, I'm picking up on many of the same qualities that first made me a fan of Chaz's 23 years ago. He's older (although some of us have our suspicions about that), wiser, and more seasoned in his craft. Yet this is classic Chaz, and it doesn't hurt to have amazing players like Kevin and Izzy bringing out the best in him. This record is full of his signatures. There are the lyrics that just knock me out ("Disco dancing with the alpha males/No, not this one/She's got a necklace made from the teeth/Of all the boys who called her cheap"). There are the references to old Hollywood and classic literature. There's that grand romance that practically bleeds from his poetry ("We were mini brutes in our punk rock boots/Throwing shapes up to the gods"). "See Her In Action" is melodic guitar pop in all of its punchy glory, propelled by a simple but perfect hook and the instantly classic line "even your god is a she". "Only Lovers Left Alive" sure feels like a throwback to the Dimestore Haloes days, right down to those red-hot rock and roll guitars and lyrics romanticizing the resilience of punk rock lifers. Given that the majority of this blog's readership is probably comprised of forty-something and fifty-something musicians, I imagine the line "If we got old, we are the last to know" will strike a chord with a lot of you. And speaking of songs that might say a lot to me about my life, "Lil' Bit Everyday" is the greatest love song to alcohol that anyone has written in years.

See Her In Action! made me think of a recent interview with Ken Burns. He was asked about why so many of his films resemble each other. His response was, "What you're referring to is style, and mine works because it's authentic to me." That quote seems to perfectly sum up The Cheap Cassettes to me. They've been perfecting their own style for the last eight years, and consequently the records just keep getting better. This EP is everything I love about pop and punk and rock and roll all in one shot. It doesn't sound like any other power pop band out there, but it sure sounds like The Cheap Cassettes. I wondered if Chaz would ever be able to top "Kiss The Ass of My Heart", but I'd say he's definitely done it with "See Her In Action". And yes, that "cover model" is Hedy Lamarr - legendary Hollywood beauty and the inventor of frequency hopping. Now go give The Cheap Cassettes three bucks!

Yeaaaahhh, THE CHEAP CASSETTES have done it again, another hit for history!!!!