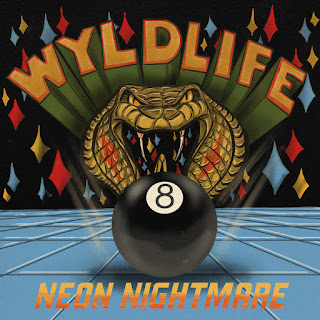 Oh boy, a new Wyldlife single! Out now on Wicked Cool Records, "Neon Nightmare" is the New York City foursome's third 7". As usual, the band serves up a welcome reminder of a time when they still played rock and roll on the radio. Well, actually they do still play rock and roll on the radio - just not on commercial radio! But man, it sure would be super cool to hear a song like "Neon Nightmare" while I was shopping for produce or getting my teeth cleaned. This thing is a HIT! As always, Wyldlife finds that perfect blend of hook-laden power pop, old style punk, and arena-sized rock and roll. Dave delivers his usual charismatic performance on vocals, and Sam launches into guitar heroics worthy of a Thin Lizzy record. This is how you do it, man: write a great pop song and rock the hell out of it! On the B-side, the band digs up a real oldie-but-goodie. "I'm Just Losing That Girl" was originally recorded in 1983 by the French band Dogs. The original is a power pop classic, and Wyldlife definitely adds that unique Wyldlife touch.

When it comes to winning formulas for 7-inch records, it's hard to beat an A-side smash and a cool cover on the flip. Wyldlife has really nailed this one. For sure, one of the best singles of the year!