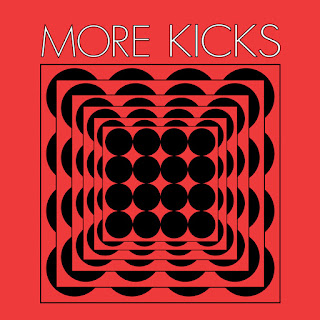 If you asked me to sum up More Kicks' debut album in just one word, I'd simply say pop. And if you think that's a bad thing, you're clearly visiting the wrong blog! The London trio fronted by Sulli from Suspect Parts has fully delivered on the "pop explosion" it's been promising all along. Out on Wanda Records, Dirt Cult Records, Beluga Records, Adrenalin Fix Music, and Snap Records, the band's self-titled LP is full of splendid tunes that combine the best elements of '60s pop, '70s punk/new wave, and '90s/2000s Brit-pop. As he's already demonstrated with his contributions to Suspect Parts, Sulli is a brilliant songwriter who really knows how to turn out a melody. He's formed the ultimate power trio with Paolo on bass and Kris Hood (Speedways/Los Pepes) on drums.

More Kicks knocked out this album in just two days, recording everything live to tape. Sometimes I ponder what sort of wizardry is involved in making a power pop record sound so, uh, powerful. In this particular instance, I would say it was a case of a tight band coming as close as possible to its live sound. It's a real treat to have a full album of Sulli songs, and his songwriting style becomes clearly defined here. He really excels at writing songs that sound upbeat but frequently prove to be bitter and hilariously savage if you're paying close attention. Combine that with his knack for turning three-minute pop songs into fully-rounded stories, and you can definitely view Sulli as a songwriter from the Ray Davies/Elvis Costello lineage. Of course it's great fun when he's cleverly scathing ("She's A Reaction" and "Rock n Roll Again" are top-notch), but he also excels at turning that brutal honestly inward. "Blame It On The Satellite" is a brilliant reflection on taking personal responsibility for your own failures. "Ain't That Just The Way" is that rare break-up song that's honestly self-aware.

While I won't quite deign to employ the old "this sounds like a greatest hits record!" cliche, I will say that this debut from More Kicks is remarkably strong all the way to the end. You've clearly got a lot of confidence in your material if you can save "the hit" for the track nine position! Heck, it might be the penultimate cut "Young Enough" that boasts the best hook on the entire record. Three of the 7" tracks were re-recorded for this release, and with good reason. It's hard to imagine a More Kicks album that didn't include "On The Brink" (how devastating are those lyrics?!) and "It's A Drag" (the best song the Buzzcocks never wrote). I love some of the little touches too. The keyboards on "She's A Reaction" give a fun, party vibe to what might otherwise have been a downer song. And I'm absolutely loving the Gary Numan knockoff/homage bass line on "What You Thinking". As a power pop fan, I'd be hard-pressed to find a record more satisfying than this one. This is one of the 2019's best LPs, and that's saying a lot considering what a phenomenal year this has been for music. How soon before Kris Hood is drumming for every great band?

I couldn't agree more, Lord Rutledge! Congrats to Sulli and Co. on a KILLER debut album!!

Lord Rutledge, what a great review of this album. You said it perfectly. Agree totally with the "live" sound. The rougher live band sound, combined with the "pure pop for now people singles going steady 60's pop radio" sound. And there was a moment when I was reminded of the Teenage Fanclub's version of "Goody Goody Gumdrops," which is about the best compliment I can think of. This release should immediately be put it in the "best 200 power pop albums every made" list. Cheers.