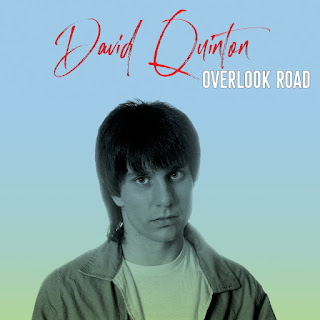 What comes to mind when you see the name David Quinton? You most likely know that he played on Stiv Bators's LP Disconnected and authored the classic track "Make Up Your Mind". You probably also know that he was the teenage drummer for The Mods - one of Canada's original punk groups. What you might not be aware of is that Quinton had a solid run as a solo artist in the early '80s. Shortly after his 20th birthday, he made a debut album that was released on the Canadian label Bomb Records. He demoed several more tracks in preparation for a second album that was ultimately never released. Having recently found the master tapes from several of his recording sessions from the early '80s, Quinton worked with Secret Mission Records to give them a proper release. And so now we have Overlook Road - a beautifully packaged 12-track LP!

The album title refers to Overlook Road in Silver Lake, Ohio - where Quinton once lived with his friend George Cabaniss (also a member of the Stiv Bators Band). Overlook Road is where Quinton wrote many of these songs on piano. One doesn't usually think of teenage punk rockers writing songs on piano, but that is the true origin of many of these tracks. A number of these songs were recorded from 1980-81 and are alternate versions of favorites from the original album (of course including Quinton's own recording of "Make Up Your Mind"). Several more were recorded for that ill-fated second album. Cumulatively, these songs document the work of a talented and often overlooked songwriter. The songs from the album are top-notch turn of the '80s power pop ("Make Up Your Mind" is every bit the equal of Bators's more well-known version). The tracks intended for Quinton's second album suggest that it would have been quite a different record. The likes of "That's All I Want", "Scene of the Crime", and "Afraid of the Light" (all recorded 1982) find Quinton's songwriting craft growing more sophisticated and contemporary. It's not hard to imagine "Scene of the Crime" as a radio hit in 1983.

It's somewhat miraculous that Overlook Road even exists. The master tapes unearthed for this release were in extremely poor condition and in serious need of repair. Anton Evans really did a bang-up job of repairing and refurbishing these recordings - which now sound as good as new! Quinton wrote the liner notes and provided photos from his personal collection for the full color insert. If you're a big fan of Quinton in particular or new wave era power pop in general, you ought to be very interested in this album. This was a true passion project for Secret Mission Records, and boy did the label ever go all-out to make it super cool! It's a deal and a steal for $15!