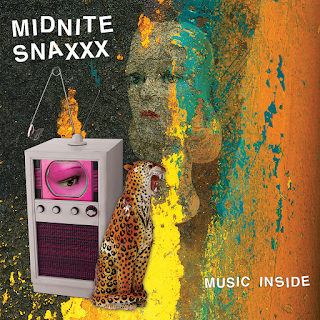 Is there anything better than when a band you love completely surprises you in the most wonderful way? Sure, Midnite Snaxxx could have made another record just like its last one. And I would have been more than happy. But knowing that the Snaxxx had a record like Music Inside in them, I am delighted that they dared to break their own mold. I won't quite say that this sounds like a totally different band. You can put on Music Inside and still tell it's Midnite Snaxxx. But it's Midnite Snaxxx taking the risk of trying something different - and the results are stunning. You don't even have to take my word for it. The entire album is streaming below!

You could argue that Music Inside (releasing December 6th on Slovenly Recordings) is a natural progression for Midnite Snaxxx. But it's a huge leap forward - one that may leave a lot of people screaming, "Wow!". And that's the good kind of wow, folks! In my mind, 2017's Chew On This remains this decade's finest work of pop-leaning old school punk. For Music Inside, the band has gone in a very different direction. With a sound based on sophisticated rhythms, nifty guitar/bass interplay, and a seamless melding of musical influences, this album allows all four members of the band to shine as musicians. This is a record heavily inspired by the post-punk/new wave of the late '70s and early '80s. Yet it's also got the energy and spirit of early L.A. punk and '90s DIY. Collectively, those influences come together in a way that sounds fully contemporary and original. The Snaxxx recorded this album in L.A. with Eric Big Arm, who beautifully captured the intricacies of the band's sound. The band makes great use of Camylle's formidable talents on this release. Almost all of these songs prominently feature her bass, which does a very intricate dance with those modern, minimalist guitars. Chris on guitar and Sammy on drums really stand out here as inventive, exceptionally skilled players. Dulcinea on guitar and vocals has found new and interesting ways to write punk rock songs with a pop sensibility.

Music Inside is in many ways the perfect punk rock record for 2019. It's reflective of personal and political frustrations that are certainly specific to Dulcinea yet also common to the current human experience. And I love the idea that one's inner rage can be channeled into something as exciting, powerful, and totally bad-ass as this record. "Music Inside", a tone setter for the entire album, is a triumph of infectious rhythms and playful melody. "Baby" and "She Don't Want That" are fierce and furious yet sure to make you want to dance. "Lights Out" brings that old L.A. punk influence into the light (and darkness) of present day. "Disconnected" and "Cyborg" rage at a hyper, near-hardcore pace yet conform to almost none of the conventions of punk rock. "Gold Chains" and "Out of Control" are so sneaky catchy that you'll never even notice those hooks latching into your skull.

Midnite Snaxxx have pulled off an impressive feat in growing creatively while remaining a punk rock band through and through. I can hear bits and pieces of past greats that this band would probably cite as essential influences (Slits, Bags, Kleenex, Wire). But mostly what I hear is Midnite Snaxxx - four extremely talented musicians creating their own extraordinary sound. It's no secret that this is one of my favorite bands. And Music Inside only makes me a bigger fan. Some may say that there can never really be anything new in punk music. Thankfully Midnite Snaxxx have other ideas.