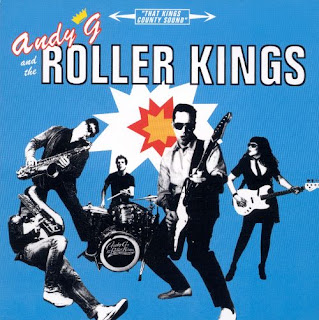 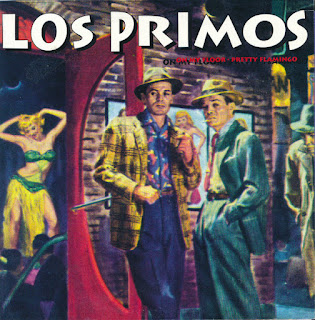 I would like to do this as a 2-fer. It makes the most sense because it covers all of Andy G's post-Devil Dogs recorded output. Sadly there is a limited but very essential amount of material; it is also listened to with a hint of what might have been.

We will start with Los Primos - of which there only are five songs. Los Primos was basically the Devil Dogs without Steve Baise. Sonically they were a continuation of what the band was doing around the ...Stereodrive! record. The prominence of saxophone as the lead instrument is what differentiates the two bands. Andy was moving towards almost a Little Richard type sound (without piano) mixed with the run-off-the-rails fury of the Devil Dogs. Think the immediacy of Saturday Night Fever with a lead sax, and you have Los Primos. While Steve Baise was in Norway working on the Vikings record, Andy was creating this project with Mighty Joe Vincent on drums, Candy Del Mar (Cramps) on bass, and Pete Linzell (Raunch Hands) on sax .

Crypt & Sympathy For The Record Industry both stepped up to the plate when Andy came around with his new project. In 1995 Crypt released Los Primos' "On My Floor" 7", which was Andy's 1st post-Devil Dogs recordings. The A-side is "On My Floor", a trashy, two-minute, rollicking, scorching original. The B-side is a clean, jangly cover of Manfred Mann's "Pretty Flamingo". One year later in 1996, the band released its second and final single on Sympathy. It follows the same format as the first: original A-side, cover on the B-side. This one may up the ante because the B-side is even better than the first. "Summertime Girls" follows the same trashy, sax-filled, adrenalized sleaze that you would expect from Andy G. The B-side is the Beatles' "Hard Day's Night". As a music fan, garage fan, Beatles fan, or Devil Dogs fan, get the single just for that. Wailing sax and a wall of NY sound create one of the best Beatles covers ever recorded, completely essential. In late(r) 1996, a compilation CD was released celebrating the famous NYC rock club Brownies. The disc features The Waldos, Turbo A.C.s, and Pillbox. The lost Los Primos track "Here She Comes" is included on the comp. With that release, the band was finished. Joe Vincent left to form The Prissteens, and Andy reloaded for his next phase.

With the end or demise of Los Primos, Andy kept the core of Los Primos: himself on guitar & vox, Candy on bass, and Pete on tenor sax. He added a baritone sax player named Steve Greenfield who previously worked with The Fleshtones. The exit of Joe Vincent opened the door for drummer Ron Salvo, and Andy G & The Roller Kings are born. Debuting four years later on March 25th, 2000 at NYC's famous Continental Club, the band would once again tap Long Gone John from Sympathy to do its first release. That Kings County Sound was released as a CDEP & 10" in 2001. Five songs (three new originals, one re-record, one cover), and the Roller Kings hit the ground running. Expanding on the Los Primos sax driven garage trash, The Roller Kings sound is bigger and more refined (but only slightly). It is still trashy with a '60s New York Dolls flair, what you'd expect from Andy. The addition of the baritone sax adds some bottom end that helps the overall sound. "Dance Last Night", "Feelin' So Good", and "My GTO" are the three originals you'd hope for from the mind of Andy G. "Summertime Girls" from the second Los Primos 7" is the re-record. There was nothing wrong with the original version. I would rather have any other song, be it an original or cover. There was no need to re-cut this track. The EP closes with a cover of Dusty Springfield's "Stay Awhile". It is not the first time Andy dipped into the '60s girl group cannon. The Devil Dogs covered The Ronettes' "Best Part Of Breaking Up" on their first record to similar success.

The band toured a bit outside of NYC shortly after the release, so very few people saw this incredible band slay audiences in the same way the Devil Dogs did. The band was relatively silent as far as releases go. It reemerged in 2005 on a Gun Club compilation called Salvo Of 24 Gunshots. The track the band chose to cover was "Bad India". The rest of the comp includes Dirtbombs, Come Ons, Demolition Doll Rods, and plenty of other good stuff. Later in 2005, the band released its final track called "Party Shoes" on the Rapid Pulse Records compilation Let's Have Some God Damn Fun! Just like that, the band was done. Nothing has been re-released since, and nothing has surfaced. It is a total shame.

As an epilogue to this story, Andy G & The Roller Kings did do a live session for WFMU on June 7, 2001. It is archived on the WFMU site under the show Three Chord Monte. They did an interview and played live on the radio. The live performance does include two songs not available anywhere else: "No Good Annie" (1910 Fruit Gum Company) and "Dead End Street" (Lou Rawls). Both songs are perfect choices to cover: sax driven songs easily adapted to Andy G's unique interpretation.

Between both bands, it is only 14 songs counting the WFMU live stuff and 12 if you don't. It is the great mystery on what happened, especially since the band was together at least five years. I would have to think with that amount of time together, there is an album's worth of material or a few singles that got recorded but couldn't find a home due to the band breaking up, not wanting to tour to promote them, or the changing of the industry in the mid-2000s. If there is something that exists, I hope that it comes out sooner rather than later. Andy G is one of the few artists that there are no bad songs that have his imprint on them. He really is that good and that important to garage music and music in general. His style has spawned countless bands, some better than others but none better than the original. God Bless Andy G.

-Rob Sheley
Posted by Lord Rutledge at 7:55 AM

Holy crap! Thanks for this write up! Best blog ever?

Learning a lot. Thanks!!! This is fantastic stuff!!!

Yeah, I thought I knew everything, too. Based on this article I have just discovered The Dirty Fingers and Stevie & the Secrets. Gooooood heeeead....i mean...good stuffff.