The Gaggers blame you! 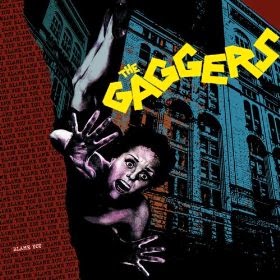 Not all of the great 1977 U.K. punk albums came out in 1977. A few came out in '78 or even '79, and I can think of one that arrived 34 years after the fact - The Gaggers' smashing debut Rip You Apart. It definitely merits a place on your record shelf next to your well-worn copies of Never Mind The Bollocks, Damned Damned Damned, and Eater's The Album. It really is that good - and even the more modern acts it's drawn comparisons to (Stitches, Briefs) are similarly devoted to the original sound of punk rock. If you don't already own this album, I'm giving you one week to acquire a copy before I'm forced to intervene for your own good.

Needless to say, The Gaggers had a lot to live up to on their much anticipated follow-up to Rip You Apart. I would have been perfectly happy if these Londoners had, in the grand tradition of '77 punk, delivered a sophomore album that was 80 percent as good as their debut. But in all honesty, they've really outdone themselves. New album Blame You was three years in the making and totally worth the wait. It'll blow your head off! What I like about this effort is that The Gaggers still sound like The Gaggers - yet you can hear an obvious progression in both their sound and their approach to songwriting. The slashing guitars and snotty vocals are still there - and the vitriol emanating from Terminal Gagger's filthy mouth has not lost even the slightest edge. But the band shows plenty of new ideas and infuses slight touches of art-punk/new wave/whatever you wanna call it into its razor sharp attack. I don't think "maturity" is quite the right word to describe what they've done with this album. But there has definitely been an evolution in their sound over the last few years. A couple songs even cross the four-minute mark - and they're among the best tracks on the album!

Blame You is exactly what it needed to be. Far from a mere rehash of Rip You Apart, it's the logical next phase of The Gaggers' sonic destruction mission. It's better produced and more thoroughly thought-out than its predecessor. The band comes out swinging with the snot-drenched belter "Steal Your Girl" - as pure of a blast of punk fucking rock as you could ever hope to hear. Terminal Gagger sounds like his head might explode, and Dagger Gagger channels Johnny Thunders and Cheetah Chrome in one fell swoop. Once these boys get that first punch in, you just know it's on. Tracks like "Raw Nerve" and "Deface Me" are every bit the smashers their titles promise, while the stinging "Instant Low" immediately joins the short list of all-time great Gaggers tracks. And if every great punk album needs a brilliant closer to leave a proper lasting impression, "Make A Mess (Outta You)" definitely fits the bill. Even a happy-go-lucky fellow like me can't help wanting to kick someone in the head after listening to this song! Having left a calling card like this, you know The Gaggers aren't about to mellow out anytime soon. And the world is far better for it.

While it did take three years for Blame You to see the light of day, you certainly can't accuse The Gaggers of being unproductive. The band's latest single, "Instant Low", is already its 7th (and already sold out!). If you're able to track down a copy somewhere, do it for the great non-LP B-side "Gagging For You" (which, as you can probably guess, is not a love song). And if, like a lot of people, you've missed out on a few of The Gaggers' 7" releases (they usually sell out in two blinks of an eye), Wanda Records has issued a dandy singles compilation called Rip You Off that features a killer selection of out of print material from 2009-12. If you've been dying for a second chance to own classic tracks like "Two Fingers Down My Throat" and "Outta Your Mind" on vinyl, your dreams have come true!

Two years ago, I suggested that The Gaggers were the best punk band on the planet. And Blame You only strengthens my case. Love it or shove it!