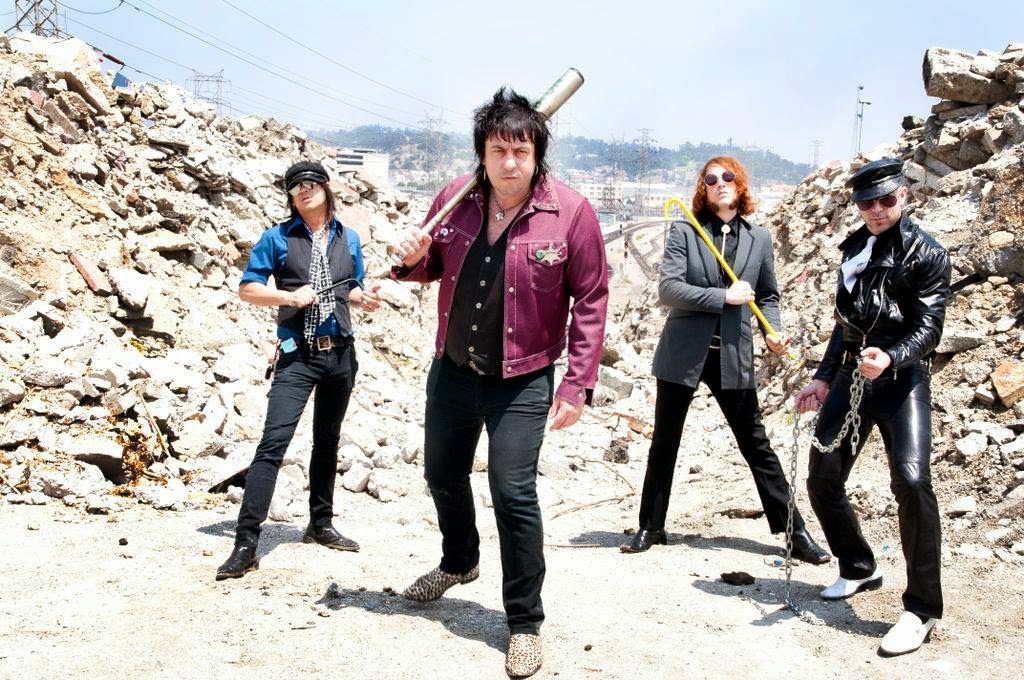 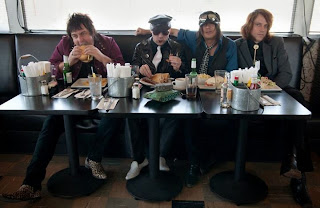 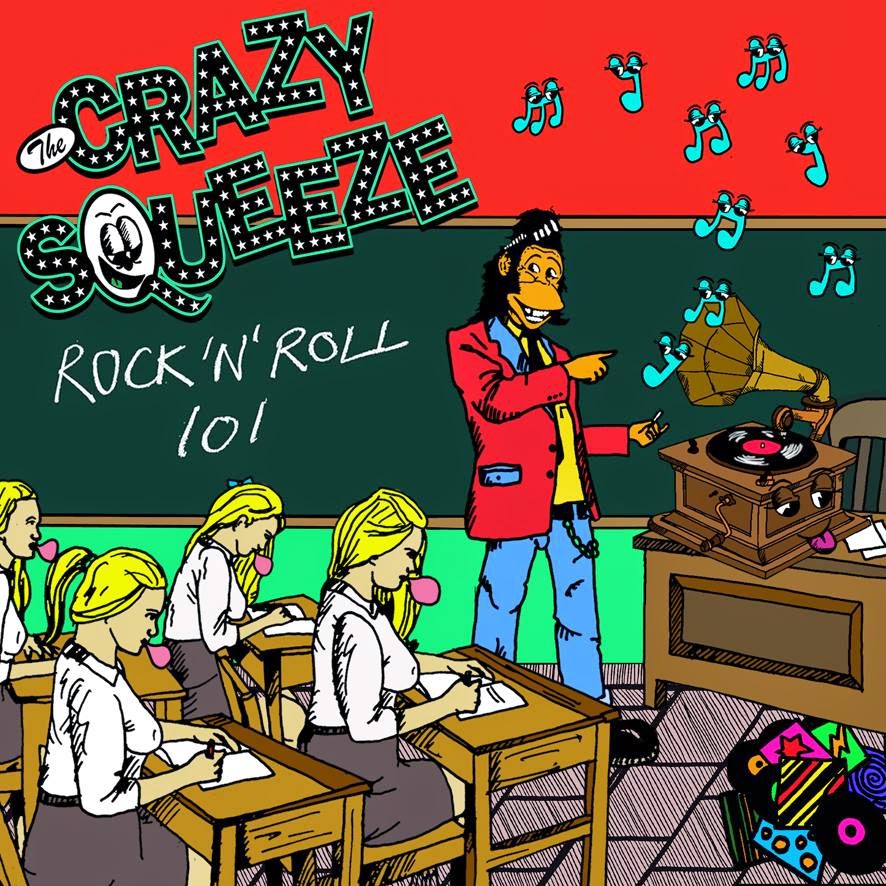 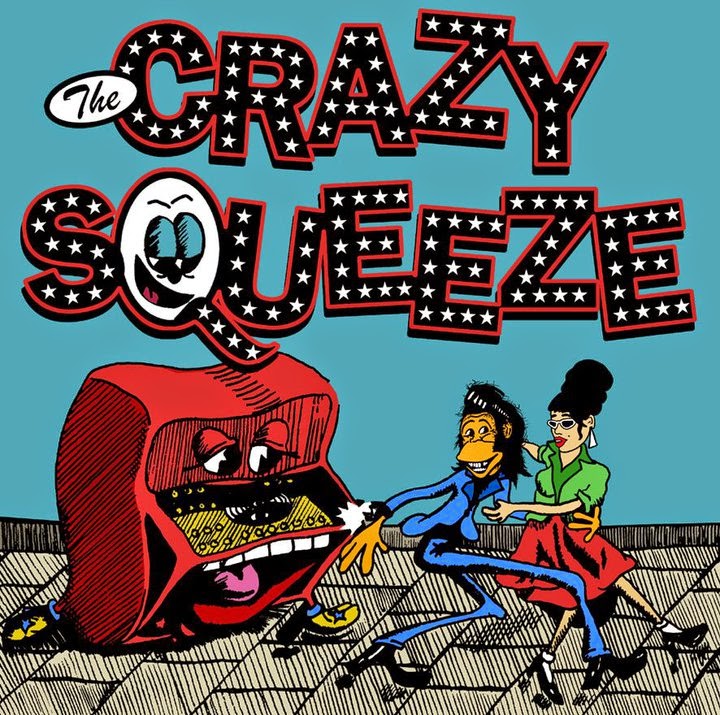 If I had to list my top five favorite present day bands, The Crazy Squeeze would definitely make the cut. This Hollywood supergroup was one of the first bands I ever reviewed for this blog, and the ensuing years have brought us a number of fine recordings from Johnny, Frankie, and the gang. Of all the bands out there playing trashy glam/rock n' roll, The Crazy Squeeze to my mind delivers the best combination of amazing songs, musical chops, and devastating handsomeness. Sometimes with "all star" bands, chemistry is a question. But these guys sound like they were born to play together. Admittedly, my Crazy Squeeze coverage has been somewhat inadequate since that first post back in 2011. I reviewed two singles but failed to inform the populace of a debut LP for the ages. I have let you down, planet Earth. The good news is that said LP is still in print and can be yours for just ten bucks. And with a brand-new single on the way, The Crazy Squeeze is again poised for world domination. With that in mind, I now present a complete listener's guide to The Crazy Squeeze. Use it prudently.

"Gimme A Kiss" b/w "I Need A Witness" single (Rapid Pulse/No Front Teeth, 2011)
The classic debut single featuring Johnny Witmer (The Stitches) and Frankie Delmane (Teenage Frames) on guitar, Chris B. (Richmond Sluts) on bass, and Johnny Sleeper (ex Stitches and Superbees) on drums. The A-side is super catchy punk rock n' roll with the most magnificent guitar hooks this side of Thunders/Sylvain. And with the band being so heavily inspired by the intersections of glam, pub rock, and early punk, the Cock Sparrer cover on the B-side was a perfect choice. And they nailed it! I believe this title is out of print - but you still win since both songs are on the album!

The Crazy Squeeze self-titled LP (Vinyl Dog/Wanda Records, 2012)
Had I actually heard this release before the end of 2012, it may have been my album of the year. Combining glam, pub rock, and '77 punk influences with power pop hooks and red hot rock n' roll guitar, this is one of the true classic albums of recent memory. It's just pure sonic excitement - and every track is a hit! "Sexual Activity Girls" is so catchy and fun that it ought to have inspired a worldwide dance craze (perhaps it still will). I'm pretty convinced at this point that it's the greatest song of the last ten years. "Boys Are Gonna Be Here Soon" sounds like the baby the Beach Boys could have made with the New York Dolls. "Outta My Head" is one of the best Heartbreakers rips ever. I could go on all day! This album is your pre-game soundtrack for glorious nights of drinking, dancing, and marathon shagging. If you dig the rock n' roll, stop whatever you're doing and go buy this thing!

"Younger Girl" b/w "Terminal Love" single (Rapid Pulse/No Front Teeth Records, 2013)
The long-awaited second single. The A-side is the best song The Boys never wrote, and the B-side is one The Boys did write. Honest John Plain himself guest stars on "Terminal Love"! Both tracks are on the CD version of the album, but "Terminal Love" is not on the vinyl LP.

"Red Rosie"/"The Lonely Ones" single (due out this fall on Pure Punk Records)
Although not yet out on vinyl, this single can be streamed in full over at The Crazy Squeeze's ReverbNation page. This might be the band's best single yet - and the first to feature current bass player, the electrifying Dat Ngo (ex Superbees). "Red Rosie" is a rip roaring shot of glammy boogie woogie with vocals that sound like Wolfman Jack risen from the dead. Taking cues from Mott the Hoople and vintage Bowie, "The Lonely Ones" is a bona fide fists-in-the-air rock anthem. Look for the band to debut it on a nationally televised stadium performance. Okay, I'm just kidding. But wouldn't that be something?

Your one-stop shop for Crazy Squeeze merchandise is http://www.thecrazysqueeze.bigcartel.com/. There you can order T-shirts and all in-print Crazy Squeeze releases. New single is due out in September. Get crazy!