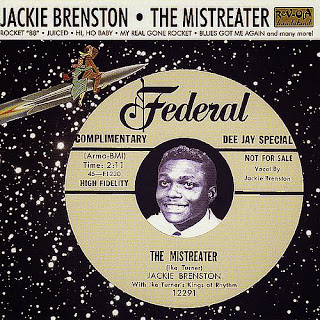 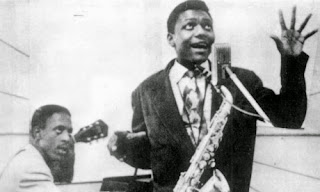 As far as "retro" reviews go, it doesn't get much more retro than this! Jackie Brentson's claim to fame is having written and sung lead on (arguably) the very first rock n' roll song - 1951's "Rocket 88". Granted, it's hard to dispute that "Rocket 88" is the shining star of Brentson's catalog. Yet he deserves better than to be remembered as a mere footnote in music history. While hardly worth the exorbitant price tag it's fetching on Amazon (somewhere in the neighborhood of $50), Rev-Ola Bandstand's 24-track retrospective The Mistreater is well worth owning if you can nab it for a decent price.

The story behind "Rocket 88" is legendary. It was March 1951, and a 19-year-old Ike Turner traveled with his Kings of Rhythm from Clarksdale, Mississippi to Memphis to record with a young Sam Phillips. This was a year before Phillips founded Sun Records - when he was still leasing his studio's recordings to labels like Chess and Modern Records. It was Phillips who insisted that the recording session go on in spite of guitarist Willie Kizart's damaged amplifier. A quick fix was to stuff some paper in the amp cone - and in that instant the distorted fuzztone guitar sound of rock n' roll was born by pure happenstance. The band recorded a number of songs - some featuring Turner on lead vocals and some featuring second sax player Brentson on lead vocals. The prize of the session was "Rocket 88" - essentially a rewrite of Jimmy Liggins' 1947 jump blues number "Cadillac Boogie". Phillips unscrupulously credited the track to "Jackie Brentson and his Delta Cats" and sold the masters off to Chess Records. Turner, with great justification, was pissed. "Rocket 88" went on to become a massive hit - going to #1 on the R & B charts. With its pounding piano, driving beat, wailing sax, and raw vocal, it's viewed by some as the precise moment in history when up-tempo blues became rock n' roll. Sadly, stardom would be fleeting for Brentson. His second single "My Real Gone Rocket" - an attempt to re-create the magic of "Rocket 88" - was a total flop. He soon parted ways with Turner and had little success on his own - issuing three more failed singles on Chess. By 1953 he was a side man again, playing saxophone for Lowell Fulson. Brentson reunited with Turner in 1955 as a salaried sax player. He did sing lead on two singles with the Kings of Rhythm, but Turner forbade him from singing "Rocket 88" on stage.

Brentson would remain in Turner's employ until 1962. After a couple more failed attempts at solo hits, Brentson more or less gave up on his musical career by 1963. He returned to Clarksdale, found work as a truck driver, and faded into oblivion. He passed away in a veterans' hospital in Memphis in 1979 at the far-too-young age of 49. The Mistreater, which includes not just his Chess singles but also those later Federal sides, reminds us that Jackie Brenston was far more than a one-hit wonder. "My Real Gone Rocket", in spite of its failure to chart, was a raucous cut and a formidable sequel to "Rocket 88" (Turner on piano was likely a big influence on Jerry Lee Lewis). And Brentson's 1956 sides with The Kings of Rhythm are all overlooked gems. "Much Later" and "Gonna Wait For My Chance" compare favorably with Little Richard's early hits, while "What Can It Be" is doo-wop gold. It's the inclusion of those particular tracks that separates The Mistreater from earlier Brentson collections that only compile his Chess sides. No doubt his best work was done in collaboration with Turner, and there's no telling what the two of them might have been able to achieve together if old Ike hadn't carried such a grudge. Far more than a mere journeyman, Brentson was a fine singer and more than a bit player in the rise of rock n' roll. If "Rocket 88" is all you know of him, there's more to be heard.