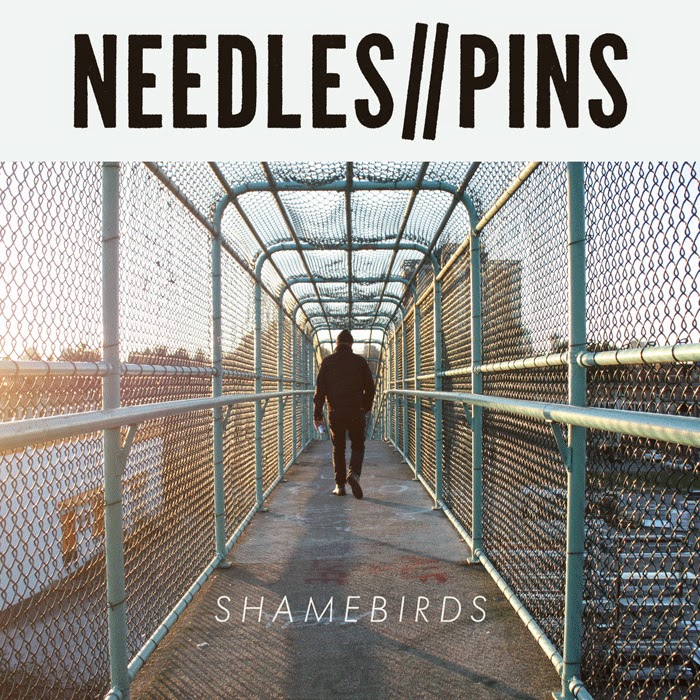 Surely a number of you have been wondering for quite some time why in the heck I've never reviewed Needles//Pins. Even to me, the answer remains largely a mystery. If you figured I would go berserk for this Vancouver trio within seconds of first contact, you figured right! Somehow the band's 2012 debut album managed to evade my detection until a recent reissue on La Ti Da Records - along with a number of truly outstanding singles. Here I've been touting all these ace Canadian power pop bands all these years - and I just might have omitted the very best of the lot! For shame! But before I had the opportunity to become fully consumed with disgrace over my prior ignorance of Needles//Pins' greatness, I shifted my attention to the band's fantastic new album Shamebirds (out on Dirt Cult Records). On the heels of Mother's Children's super great LP Lemon, Needles//Pins have stepped up to make this the summer of power pop!

I think what I like about Needles//Pins is that they're only a genre band on the surface. From a purely stylistic standpoint, they've got that Undertones/Pointed Sticks classic '79 pop/punk thing down to a T. And of course that hits me right in my sweet spot. But once singer/guitarist Adam Ess opens his mouth, there's no mistaking which band you're listening to. In a scene full of sound-alike punk/garage/powerpop bands (many of which I like), Needles//Pins are the proverbial breath of fresh air. With a snot-nosed vocal tone that falls halfway in between King Louie Bankston and B.A. from Sloppy Seconds, Adam is not your typical pop singer. He's a true original, and as a songwriter he has quite the knack for articulating the agonies of breakups and damaged relationships. He goes where so many other artists have gone before, but he's such a unique and likable character that it all feels fresh. And listening to the heart and passion that he pours into these songs, you cannot question that they've come from a very real place. What a great singer!

Shamebirds does what a lot of great pop records do - take downer subject matter and somehow turn it into great fun! Propelled by an air-tight rhythm section (Macey Bee on drums and Tony X on bass) and Adam's punchy, melodic guitar, these songs will quickly have you bobbing your head and humming along to their impossibly catchy choruses. You'll need a truck load of antibiotics to avoid getting infected by the opening title track - perhaps the most perfect slice of power pop punk I've heard all year. I've hit the repeat button so many times that I might have to replace my computer mouse! Quite a few of these tracks remind me a lot of Missing Monuments - and not just because of the vocal similarities. Adam is an amazing storyteller, and so many of these songs come off like musical vignettes on the miseries men and women inflict upon one another. And it's a credit to the band that all of these songs are just as good musically as they are lyrically. "Only Call Me When You're Drunk"- which has the soul of an old country song and the hooks of a classic pop/punk jam - is an instant smash. And I'm pretty sure that that "I wanna resent you/But I'll hold you now" line from the great "What's His Face" will be stuck in my head until the end of time.

No doubt, there's been something amazing brewing in the Canadian power pop scene in recent years - a wave of incredible bands that people will look back on in a few years and say, "Man, those were the days!" Needles//Pins typify that whole scene, but they also manage to transcend it. And even at a time when there are so many good powerpop/punk albums coming out, Shamebirds is something special.

I love this album, when I ordered this I couldn't imagine how good it would be