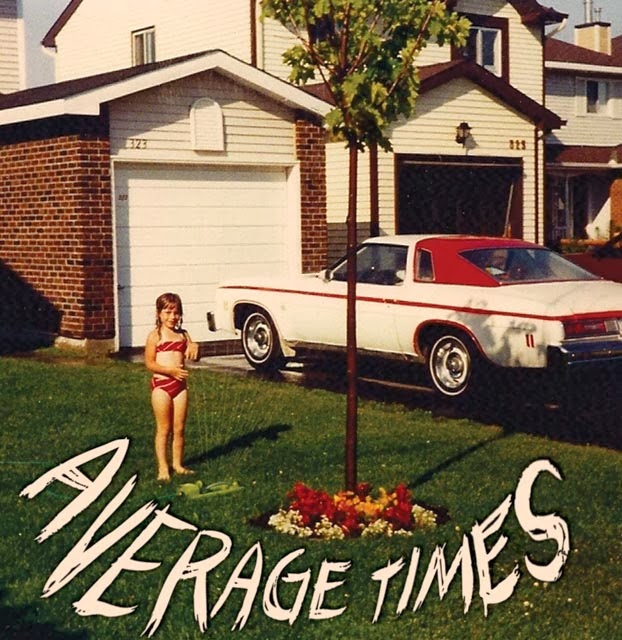 Canada is gold again! Are you getting sick of this yet, because I sure ain't! And the thing is, I haven't even begun to scratch the surface of what's going on with the Canadian garage punk scene right now - especially in Ottawa! There is no rational explanation for the large amounts of amazing music coming out of Canada these days. It's like trying figure out how my Canadian bacon could come from Illinois or why Labatt Blue is actually pale. And why aren't the Toronto Maple Leafs called the Maple Leaves? It fatigues the brain to ponder such mysteries of the north. So I'm just going to sit back, pop open an adult beverage or two, and continue to enjoy the hell out of what I'm hearing. The latest Ottawa band to set my hair on fire (if I had any) is Average Times. Toronto's Hosehead Records will be issuing the band's self-titled debut LP next week (a co-release with P. Trash Records out of Germany). And let's just say that there's nothing average whatsoever about Average Times! With Paul "Yogi" Grainger (White Wires, Steve Adamyk Band, Mother's Children) recording the album, you should have some idea of what to expect.

Like all the aforementioned bands, Average Times mix up a tasty cocktail of buzzing garage punk and tuneful power pop. What sets this band apart, I'd say, is a little more grit and a lot more snarl. Or, as the band poetically states it, it's like "barf and sugar mixed together". The abundance of hooks and crisp production are definitely in keeping with the whole "Ottawa thing" that's happening right now. But I also hear influences ranging from classic late '90s garage/trash to early American punk by the way of The Stooges/New York Dolls. Imagine The Reatards fronted by Stiv Bators, playing songs written by the Marked Men at a Mean Jeans house party. Average Times have by no means reinvented the wheel, but they've delivered exactly the kind of record that made me fall in love with punk music in the first place. This is a fun album full of snotty, catchy tunes that will have your head bobbing as soon as the needle drops on the vinyl. And time and time again, I'm compelled to pump my fist in the air and sing along loudly. Only six of 13 tracks surpass two minutes, and none surpass three. But don't be fooled by the minimalist, let-it-rip approach. The songwriting here is very accomplished - as is the lead guitar work.

"Popsicle", which opens the album, sounds like a song that might kick off an Average Times live show. It's instant energy and a real tone-setter. And there's no letup from there. "Leave Me Alone" sounds like the Dead Boys covering The Undertones. "Snakes" is fast and fiery and guaranteed to get stuck in your head. "Summer Nights" sprinkles in some keyboards and is every bit the soaring anthem the title promises. And by mixing all-out burners like "Wasted On Wine" and "Look Loose" in with the hookier rock n' roll based tracks, the band avoids the sort of repetitive rut that sometimes plagues garage punk releases. Out of 13 songs overall, not a single one is a dud. This is my favorite album of the year so far. It has the feel of a summer record - which really hits the spot since we've all been freezing our nut sacs off for months. If you like all the newer garage stuff but wish it sounded more like '70s punk, have yourself a listen. Downloads are available now, and the LP goes on sale March 4th!