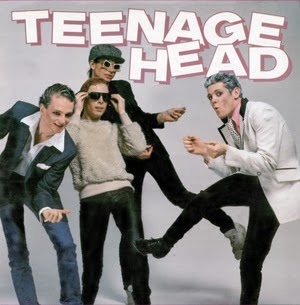 A number of years ago, Shawn Abnoxious asked me why I had never written about Teenage Head. It was a very good question. And I don't really have a good answer. Maybe it was one of those things I've just never gotten around to doing - like reading Crime And Punishment or trying a Krispy Kreme doughnut. It does seem odd that over a two decade "career" spent celebrating the pop/rock n' roll side of '77 punk, I've never done an article on the great Teenage Head. Well, I had never done an article on Teenage Head - until today!

When we talk about the great "scenes" of early punk rock, London, L.A., and New York usually get brought up first. If the Canadian punk scene circa the late '70s and early '80s isn't mentioned in the same breath, it probably should be. Canada had so many great bands - Viletones, D.O.A., Forgotten Rebels, Pointed Sticks, Subhumans, Diodes, Modernettes, Demics...I could go on and on. My personal favorite of the lot has to be Hamilton, Ontario's mighty Teenage Head - one of Canada's first and best punk bands. With a name and a sound inspired by the Flamin' Groovies, Teenage Head specialized in fun songs about girls, cars, boozing, and good times. Spiritually akin to The Dictators with the hooks of the Ramones and the swagger of the New York Dolls, this was a band that typified first wave punk while also drawing largely from early rock n' rollers such as Eddie Cochran and Chuck Berry. With its raw production and simplistic musical approach, the band's 1979 debut LP remains the purest and finest representation of what Teenage Head was all about. Oh, and it doesn't hurt that it's full of classic songs!

In the tradition of Johansen/Thunders and Bators/Chrome, Teenage Head featured a star tandem on vocals and lead guitar - with front man Frankie "Venom" Kerr (R.I.P.) providing the personality/charisma and Gordie Lewis dishing out the hot guitar licks. And in Steve Mahon and Nick Stipanitz, the band had one of the greatest rhythm sections of the first wave punk era. Kicking off with two of the band's finest songs - "Top Down" and "Ain't Got No Sense" - Teenage Head could easily be forgiven if it failed to sustain a fast start. But it doesn't! It's a great album the whole way through - never relenting in its punked-up '50s rock n' roll attack with additional nods to the Stones and Stooges. Straight-ahead rockers like "Lucy Potato" and "Bonerack" sound great with the volume cranked to ten and a cold beer in your hand, while "Little Boxes" ought to be a staple on the Ramones' Pandora channel. Listening to a song like "You're Tearing Me Apart" and its gleeful blend of rockabilly, pop, and glam, I just can't deny Teenage Head's influence on a whole bunch of my favorite bands of the '90s and beyond.

Teenage Head were probably one of those bands that never fully captured the electrifying energy of their legendary live shows on record. But they came awfully close on this self-titled debut. It was considered a commercial flop upon its initial release, but time has proven it to be a stone cold classic. The 1996 CD reissue is long out of print but well worth tracking down if you don't have to pay an arm and a leg for it (or just get it off iTunes for $10!). I also highly recommend the band's second LP, Frantic City. No doubt there were a ton of great bands in the early years of punk. But in my book, Teenage Head was one of the very best.

https://www.facebook.com/teenagehead
Posted by Lord Rutledge at 10:41 AM

Great post!
The album they did with Marky Ramone takes tunes from both their first album, Frantic City and a few off their later albums. I think it is just called "Teenage Head with Marky Ramone". Totally worth checking out and should still be easy to find, think it came out in 08. Recording has great energy and stellar production bringing classic tunes back to life! Love it

As well another Canadian band called The Vapids did a cover version of the first Teenage Head album which is also a blast and worth having a spin of!
Anyways great to see the write up on Teenage Head!
Cheers!